The Chelsea forward believes his national side have the ability to adopt a number of different approaches in their matches but have not yet found the best ways of linking midfield to attack.

“We have the players who can vary it. But the art in the match is to find exactly the right way to catch your opponent out,” the Belgium captain told a press conference on Monday.

Belgium know a point from their final Group E match against Sweden in Nice on Wednesday will be enough to clinch a place in the round of 16. 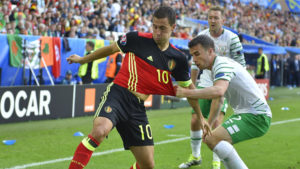 Hazard added: “If there is a lot of movement throughout the team, it makes it a lot easier to find openings and to make our movements.

“The engine of the team lies in midfield. Kevin De Bruyne and I can bring a little extra but the engine has to keep turning.”

The Belgians, one of the pre-tournament favourites, were heavily criticized after losing 2-0 to Italy in their opening game of the tournament in France. Their 3-0 win over Ireland put them right back in contention.

“I don’t see myself as the star of the team. The team must shine on its own. Everyone has an important contribution to make.”