The Movie “76” Took Us 7 Years to Complete -Ramsey Noah 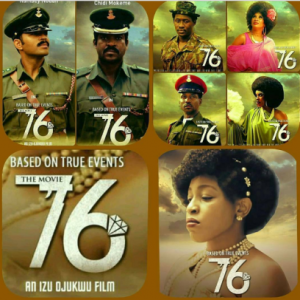 Nouah who plays the lead role as Joseph Dewa in the film revealed that it took the producers seven years to complete it.

He shared this information at the movie screening held recently at Genesis Cinemas in Lagos.

The Nollywood actor revealed that real life and archived footage of Nigeria in the 70s was retrieved from the United States of America.

”76? follows the events that occur when a young officer is accused of being involved in a botched coup.

Meanwhile the movie’s executive director Tonye Princewill revealed the reason why he invested his money in this movie.

“The reason I pumped my money intois film is because we go to contest elections and we find out that the people we fight for don’t even want to be fought for, So we came to film to say let’s tell a story that’ll will make our people ask themselves what kind of leader do they want,”  he said.

The executive producer said he hoped this the historical drama would encourage people to ask questions.

“We are hoping that by this movie we are sending messages.

“We don’t just want to entertain people, we want to educate people as well and we hope that by this film not only are entertaining you, we are giving you history in an entertaining fashion which ultimately educates you,” he said.

Nouah said the story was important way to teach the younger generation about the history of Nigeria.