Admin
0
A close associate of Asiwaju Bola Ahmed Tinubu has debunked rumours that the former governor of Lagos is very ill and receiving treatment abroad. 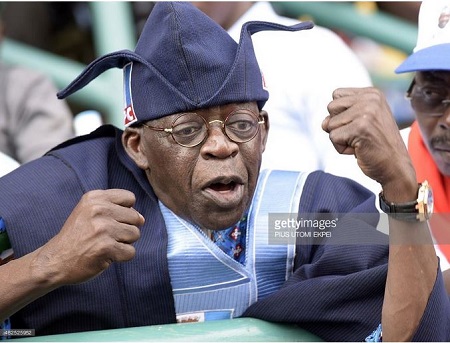 Asiwaju Bola Ahmed Tinubu
Following claims by Plateau State Governor Solomon Lalong that the absence of the national leader of All Progressives Congress (APC), Asiwaju Bola Ahmed Tinubu at last Saturday’s Ondo State APC governorship rally was as a result of his ill-health, APC chieftain Senator Tokunbo Afikuyomi said yesterday that Tinubu is hale and hearty.
Lalong, who is the the Chairman of the Ondo State APC Governorship Campaign, was quoted to have told State House Correspondents that, “if a leader was not there and he said he was not there because of ill-health, we have prayed that God will heal him.”
In a statement, Afikuyomi, a one-time Lagos State commissioner, described the claim credited to Gov. Lalong as false.

Afikuyomi in the statement said: “I travelled to the United States of America with Asiwaju Bola Ahmed Tinubu to witness the recent U.S. elections.”

“We traversed a number of cities together where we engaged with a number of Nigerians who are genuinely concerned about the state of affairs in our dear country. Jagaban was in a remarkable state of mental and physical wellness. When we ended our trip, I saw him off to the airport in Chicago from where he headed for Europe again. I still met with him in Europe thereafter. It is therefore absolutely incorrect and most embarrassing for anyone to attempt to invent such a laughable reason for Asiwaju Bola Tinubu’s absence at the rally.

“The fact that somebody went for medical check-up does not mean he is ill. In the likely event that Asiwaju, like all mortals, was ill at all, I doubt if Mr. Lalong would be the first to know by reason of relationship, proximity and trust.

“Prominent politicians like Ogun State Governor Ibikunle Amosun have been speaking with Jagaban Tinubu. Governor Amosun particularly communicated with him a day before the Ondo rally and he can never claim not to have spoken with him.

“I have also remained in constant touch with Asiwaju Tinubu since my arrival in Nigeria. We speak daily as a matter of fact. I have been inundated with calls by friends, associates and other well-meaning Nigerians trying to ascertain the veracity of this ludicrous claim. I hereby ask all friends and lovers of Asiwaju Tinubu to dismiss the claim and know that he is hale and hearty.”

All Roads Lead to the Most Anticipated ...