2face Idibia’s visit to Rwanda comes on the heels of Wizkid’s sold out concert in the country back in August and P-Square’s sold out gig in 2012.

Rwandans on social media complained bitterly of lack of proper promotion for the concert which led to an all time low of less than 50 attendees. 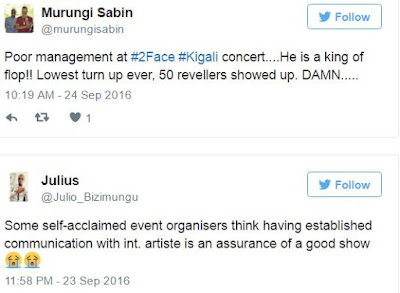 2face had been brought in to the East African country by Belinda Umurerwa CEO of Kigali Entertainment. Investigations revealed that the concert, which was supposed to start at 6pm, started at 10p.m with almost an empty venue to welcome the singer.

At that time, we gather that only journalists were seen taking pictures of empty seats while the anchor, MC Tino simply told the DJ to keep playing music as they await people to come in.

When it was clear that no one else was turning up for the gig, MC Tino called on stage a couple of local artistes including Jack-B, Gilbert ‘Guitar’ Gabiro to perform.

At about 11:30p.m, 2face took to the stage after long hours of negotiation between his management team and the organisers on whether he should perform or not. 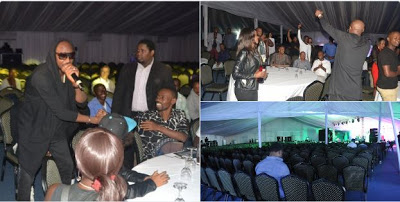 Deciding to perform to the very few fans present, 2face was quoted to have said, ‘Hello Kigali. I know you’re very few but we don’t want to talk about whatever happened. I am going to do a unique show for you who managed to come‘.

He then went on to perform about five songs including ‘True Love’, ‘If Love Is A Crime’, ‘Blind’, and ‘African Queen’ before his manager, Efe Omorogbe gave him a sign to quit the stage.

Rwandans are now blaming the show organisers for the huge flop.
‘I think the timing of the show was not good. 23rd is not a good date because most people are yet to get their salaries. For a show to succeed, you have to put it at the end of the month or at beginning when people have money’, said Gilbert Dukuze, a Rwandan pundit.

He also pointed out that 2face coming a week right after a mega concert in town, by Sauti Sol, was a major undoing, especially considering that some music lovers think that the Nigerian artiste’s best days are behind him.