There have been deployment of heavy military hardware to the Niger-Delta region recently by the Nigerian Army. It appears the military is ready to go to war with the Niger-Delta Militants who have been unleashing mayhem on oil facilities thereby crippling oil production in the region.

As reported by Guardian newspaper Yesterday, a long convoy of about 32 articulated vehicles was seen on the Port Harcourt-Warri dual carriage way carrying long-range tanks, armoured personnel vehicles and an assortment of weapons. The vehicles allegedly headed to military formations in Delta and Bayelsa states.
Since the military launched ‘Operation Crocodile Smile’, there has been such a movement of heavy military hardware. But it has become frequent lately. 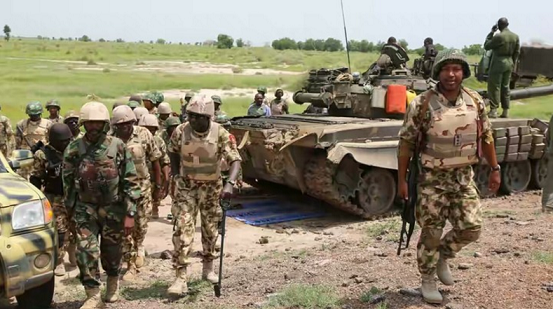 Some days ago, the Chief of Army Staff said the deployment was not meant to intimidate residents of Niger Delta but for strategic military purposes to make Nigerians feel safe in the region.

But the Ijaw Youths Council (IYC) alleged that the deployment of troops and weapons in the region was an indication that the Federal Government was not interested in peace in the region and was intimidating the people. IYC spokesman, Eric Omare, said the President Muhammadu Buhari’s government had shown through the deployment that it was never interested in dialoguing with the Niger Delta stakeholders.

Also, the Pere of Seimbiri Kingdom, His Royal Majesty Ayemi Botu, said the frenzied deployment of military hardware and troops in the region showed insensitivity on the part of the Buhari government and could throw the region into chaos.

“Sequel to the acceptance of a ceasefire, courtesy of monarchs and other leaders of the Niger Delta 10 days ago by the Niger Delta Avengers and other militant groups, one would have expected President Buhari to announce his dialogue team as he did in early June, 2016 when he declared a two-week ceasefire, preceding his medical trip to the United Kingdom.

“To the contrary, he has ordered the mobilisation of troops to the Niger Delta under the pretext of military exercise code-named ‘Operation Crocodile Smile’ thus sending negative signals to all Nigerians and the international community that the stage is set to crush the militants at a time they have accepted ceasefire. “We have been making frantic and passionate appeals in conjunction with the United States Consul General, Mr. John Braye, calling on both the Federal Government and the militants to sheathe their swords and embrace dialogue to proffer lasting solutions to the Niger Delta quagmire.

Both the United States and the European Union have expressed their determination to partner the Federal Government in this onerous task now that the opportunity is available,” Botu said.

He implored President Buhari to withdraw the troops and follow the path of honour to set a machinery in motion without further delay to commence the dialogue.“Wise counsel suffices, but if unheeded and the military authorities go ahead to unleash their arsenal on the goose that lays the golden egg and all the strategic and volatile oil installations are affected, invariably the resultant conflagration will certainly overwhelm the entire region, Nigeria will be comatose economically,” the monarch said.

Meanwhile, the military has vowed to use proportional force to dislodge those described as criminals and groups threatening the peace and stability of the Niger Delta.As it continues its offensive against militants, the military urged law- abiding residents of the region not to panic when they see the movement of troops and heavy weapons.

The Commander, 2nd Brigade, Nigerian Army, Port Harcourt, Rivers State, Brig.-Gen. Hamisu Hassan gave the advice yesterday.“The exercise ‘Operation Crocodile Smile’ is part of the routine military exercise that we conduct and has been planned to take place to enhance proficiency of our personnel. Such an exercise is done in other parts of the country, in the North East and North West, and which is peculiar to the security challenges in that area.

“So, I want to assure the law-abiding citizens to remain calm as they see troop movements and equipment they have not seen before. They should go about their lawful activities without fear. Nothing will happen to any law-abiding citizen. We are here to protect them,” the commander said.

According to him, the ‘Operation Crocodile Smile’ has made tremendous achievement in the fight against pipeline vandalism, cultism, and other criminal acts in the Niger Delta.

IT Jobs: A promising Future

Yvonne Nelson is head over heels for ...