As the American election draws nearer, the two candidates contesting for the most coveted seat in the world have continued to devise various means to outshine each other be get support from the American populace.

“ISIS is honoring President Obama,” he said during a rally in Fort Lauderdale, Fla.  “He’s the founder of ISIS. He founded ISIS.”

“I would say the co-founder would be ‘Crooked’ Hillary Clinton,” Trump added of Obama’s former secretary of State and his Democratic rival. 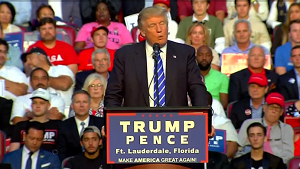 Trump criticized Obama’s decision to withdraw U.S. military forces from the Middle East and leaving behind a void ISIS could fill.

“We should never have gotten out the way we got out,” he said. “We unleashed terrible fury all over the Middle East.”

“Instead of allowing some small forces behind to maybe, just maybe, keep it under control, we pulled it out,” the GOP’s presidential nominee added.

“Then Obama came in, and normally you want to clean up and he made a bigger mess. We’re not respected. We’re laughed at all over the world.”

Survey reveals why most men cheat