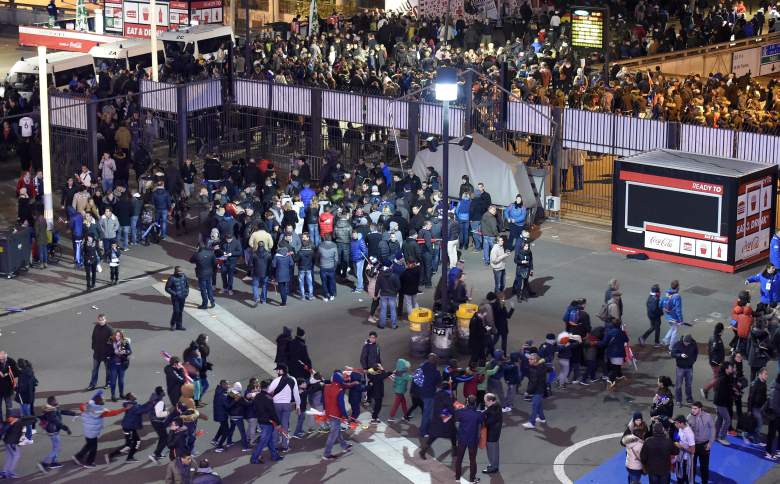 The Islamic State group claimed responsibility Saturday for an attack in which a Tunisian ploughed a truck into a crowd in Nice, killing 84, prompting hard questions in France over security failures.

In a statement via its Amaq news service, IS said one of its “soldiers” carried out Thursday night’s attack “in response to calls to target nations of coalition states that are fighting (IS)”.

Investigators said he had no known connection to jihadist groups, and no evidence to back the IS claim has been presented.

French President Francois Hollande met his defence and security chiefs and cabinet ministers as political and media criticism mounted over security failings after the third major attack in France in 18 months.

“If we are at war, as the government tells us, then the currency of war is intelligence, learning from experience, analysing failures and victories,” wrote Yann Marec in an editorial for the southern region’s Midi Libre newspaper.

He was one of several calling for action, and not merely “the same old solemn declarations” from the government, as Le Figaro daily said.

Some 30,000 people had thronged the palm tree-lined Promenade des Anglais on Thursday night to watch a fireworks display with their friends and families, but the night turned to horror as the truck left mangled bodies strewn in its wake.

In Nice, the seaside streets that would normally be bustling on a summer weekend were near-deserted, with teary residents making their way to the promenade to lay down flowers in memory of the dead.

At least 10 children and teenagers were among the dead as well as tourists from the United States, Russia, Ukraine, Switzerland and Germany.

A spokeswoman for the Nice hospital said 16 bodies had not yet been identified. She said five children were still in a “critical condition”, and an eight-year-old in a stable condition had not been identified.

Hollande said the country would observe three days of mourning as he warned the death toll could rise further, with more than 50 people still fighting for their lives.

Police have arrested four more people linked to Lahouaiej-Bouhlel, as well as his estranged wife.

IS also claimed responsibility for the November 13 attacks which killed 130 people in Paris, while gunmen in January 2015 attacks on the Charlie Hebdo weekly and a Jewish supermarket were linked to both IS and Al-Qaeda.

The massacre has once again shaken the country to its core, and prompted questions about the effectiveness of security measures with the country already under an eight month-long state of emergency.

France, which has a Muslim population of nearly five million, is also home to hundreds of jihadists who have flocked to fight alongside IS.

Presidential contender and former prime minister Alain Juppe said Friday that the latest carnage could have been prevented if “all measures” had been taken.

But government spokesman Stephane Le Foll slammed Juppe’s comments, saying there was as much security present for the fireworks display as there had been for the Euro 2016 football tournament in the city.

He said there were more than 185 police, gendarmes and soldiers on the ground, as well as municipal police and a vast network of surveillance cameras.

“Despite all of that, this man’s decisions… created the drama and horror we experienced.”

Authorities will also face questions over how Lahouaiej-Bouhlel slipped through the cracks, as initial investigations showed he had a record of petty crime and domestic violence, but no known connection to terrorist groups.

Anti-terrorism prosecutor Francois Molins said the attack was “exactly in line with” calls from jihadist groups for supporters to kill in their home countries.

A statement from IS’s official radio bulletin Al-Bayan said the attacker had carried out a “new, special operation using a truck”.

Al-Bayan warned that Western countries “will not be spared from the blows of the mujahideen” no matter how much they increase their security measures.

For several years, extremist groups such as IS and Al-Qaeda have exhorted followers to strike “infidels” — singling out France on several occasions — using whatever means they have to hand.

In September 2014, IS spokesman Abu Mohammed al-Adnani, suggested supporters “run (infidels) over with your car”.

While some attacks on the West — such as the November assault on Paris and the March bombings in Brussels — were carried out by jihadists who have been to the centre of IS operations in Iraq and Syria, others have been led by so-called “lone-wolf” attackers.

Lahouaiej-Bouhlel’s father said he had suffered from depression and had “no links” to religion.

“From 2002 to 2004, he had problems that caused a nervous breakdown. He would become angry and he shouted… he would break anything he saw in front of him,” Mohamed Mondher Lahouaiej-Bouhlel said in Tunisia.

Neighbours described the attacker, who worked as a delivery man, as a loner who never responded to their greetings.

He and his wife had three children, but she had demanded a divorce after a “violent argument”, one neighbour said.

NATO say they will stand by Turkish ...