I don’t know for sure that Will and Jada Pinkett Smith are the most horrible parents on Earth. But the case for that seems strong when you consider their überentitled, brainless, self-adoring, twaddle-spewing little munchkins.

These kids are to childhood what the script of “After Earth” was to writing. Spoiled? Too mild. These kids are nuclear narcissists. The elder Smiths may have boycotted the Oscars because they weren’t nominated, but they boycotted parenting because they couldn’t be bothered to raise kids with any grounding in reality.

Naming their children after themselves via gender-reversal — the boy, Jaden, is 17, while his sister, Willow, is 15 — turned out to be merely the first sign that the Smith household would be a greenhouse in which all egos would be jacked up on maximum-strength fertilizer (the Hollywood kind) and cultivated to grow crazily.

Just check out the Twitter bios of this pair: Jaden Smith promises, “If You Want To See The Future Of Music, Photography and Film Making.”

Whoa, kid — why not worry about walking the dog and taking your SATs before you do all that? Jaden’s primary activity these days seems to be trying to be the black Boy George, minus the talent.

Playing dress-up in a variety of feminine looks, Jaden (who is starring in a womenswear campaign for Louis Vuitton) presents a shot of himself in a matching skirt and jacket, with long dreadlocks and a Boy George hat, under the caption, “STUNNA.” 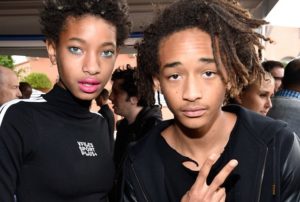 A recent T magazine interview featured many other pearls of wisdom from the Spawn of Smith.Willow’s tweets are, if anything, even more pretentious, vapid and humorless than her brother’s. “ANYTHING that I EVER do is geared towards the evolution and vibrational elevation of this planet through the inspiration of individuals,” reads a recent thought. Girl, the planet isn’t asking for your advice. And how does kiddie R&B like “Whip My Hair” (her 2010 single) lead to “vibrational elevation” of anything?

Willow: “.?.?. the feeling of being like, this is a fragment of a holographic reality that a higher consciousness made.”

Jaden: “We don’t think a lot of the music out there is that cool. So we make our own music. We don’t have any song that we like to listen to on the [Pacific Coast Highway] by any other artist, you know?”

Willow: “There’re no novels that I like to read so I write my own novels, and then I read them again, and it’s the best thing.”

Jaden: “You never learn anything in school. Think about how many car accidents happen every day. Driver’s ed? What’s up? I still haven’t been to driver’s ed because if everybody I know has been in an accident, I can’t see how driver’s ed is really helping them out.”

Will Smith has proudly claimed responsibility for being the Dr. Frankenstein who created these terrifying ego monsters, saying in a recent BBC radio interview that Jaden has a “really powerful internal quality as an artist that as parents we encourage .?.?. Jaden is 100 percent fearless, he will do anything. So as a parent it’s scary, it’s really terrifying — but he is completely willing to live and die by his own artistic decisions and he just doesn’t concern himself with what people think.”

Which has led to goals like this one Jaden mentioned: “I have a goal to be just the most craziest person of all time.”

Naira pegged at 253/$ at Interbank Market