Some of the biggest names in the music, media and creative industries will gather at Freedom Park on June 19th to celebrate respected broadcaster and music critic, Benson Idonije for his 80th birthday celebration.

The event, which has been put together as part of the NECLive mini -series, is the initiative of Committee for Relevant Arts (CORA) and Culture Advocates Caucus, and organized in partnership with BHM.

Benson Idonije, who is a recipient of the prestigious “NETHonours” comments, “I’m grateful to be surrounded by amazing colleagues, friends and family as I enter a new year. The NECLive mini-series, which will hold on the 19th of June is platform will help us adapt to the ever evolving music industry. It is important for us to collectively engage ourselves as stakeholders and more important as members of an evolving community, to bring about the desired industry structure” I’m grateful to CORA, Nigerian Entertainment Today and NECLive for this innovative platform.” 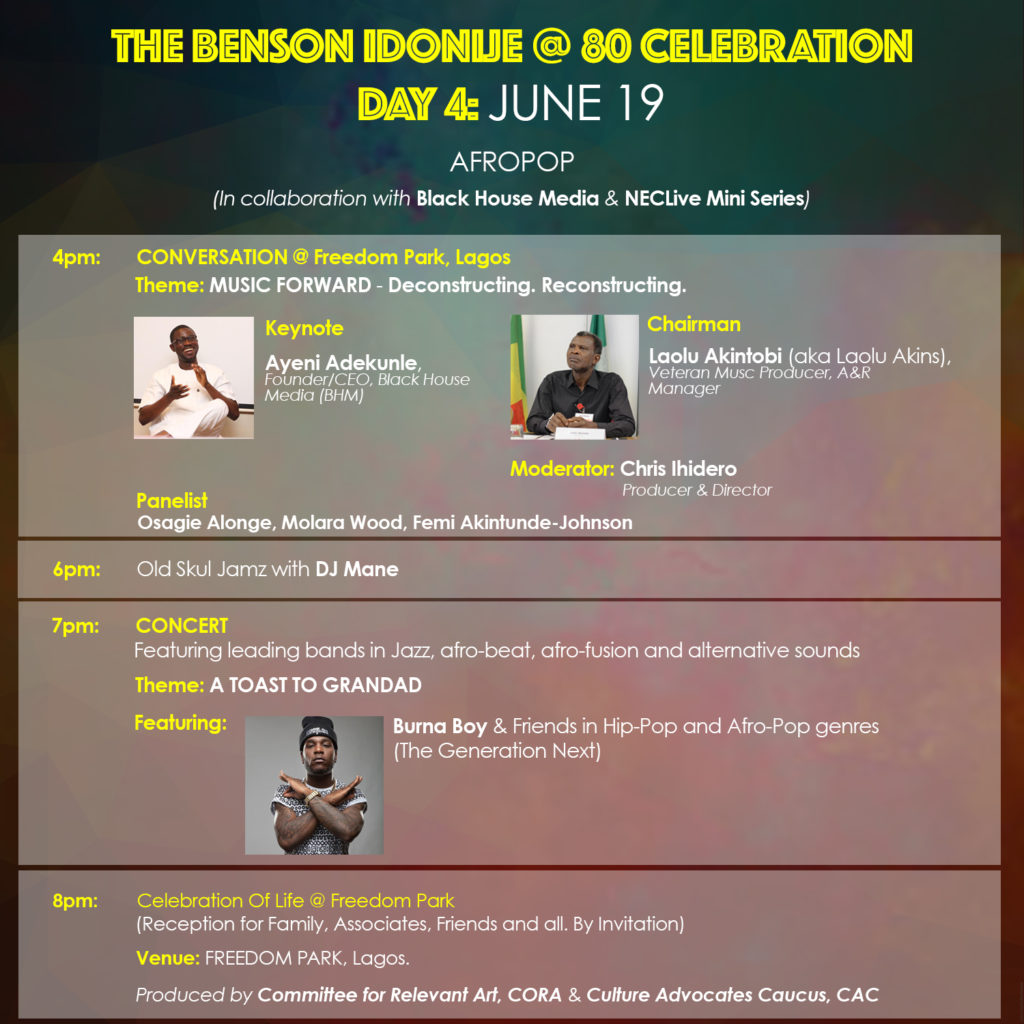 NECLive Coordinator, Henry Ekechukwu further highlights the contribution such interactions make in developing a formidable entertainment industry. “Since introducing NECLive Mini-Series in 2015 as a progressive conversation and capacity building forum following our annual conference held in April, we are encouraged by the level of collaboration and participation involving key industry stakeholders. We are also very excited to be hosting the second edition of the NECLive Mini-Series in honour of an entertainment icon in person of Pa Idonije”.

The objectives for NECLive Mini-Series include skill enhancement for industry practitioners, provision of opportunities for related conversations, dissemination of new knowledge, practical demonstration by experts and networking. Interested participants can now register here to be a part of the conference and the concert afterwards.

Born in 1936 in Otuo, Owan East Local Government area of Edo State, where he also started elementary school, Benson Idonije studied Communications Engineering at Yaba College of Technology, Lagos, after his Cambridge School Certificate at Holy Trinity Grammar School, Sabongida Ora. He joined the service of the Nigerian Broadcasting Corporation (later Federal Radio Corporation of Nigeria, FRCN) in 1957 as Engineering Assistant but moved to mainstream broadcasting in 1960 when, among other roles, he became a producer and presenter of such famous programmes as The Big Beat and Stereo Jazz Club, eventually participating in setting up and pioneering Radio Nigeria 2 (now Metro FM) in 1977.

The high point of his career in broadcasting was his transfer to FRCN Training School where, for eight years, he became Principal Lecturer and Chief Training Officer, Programme Production — from 1984 to 1992 — when he retired.

After retirement, Benjay, as he is fondly called, contributed critiques, opinions, and commentaries to many major arts-related journals in Nigeria and abroad. In 1996, he was formally invited by The Guardian (Nigeria) to write for the newspaper; and he maintained three columns every week – Evergreen (Wednesdays), Sound and Screen (Fridays) and All That Jazz (Sundays).He is perhaps the only columnist in any Nigerian newspaper with such frequency and resourcefulness.