WATCH: Veteran Actor, Oga Bello and his wife recount how they met and fell in love! 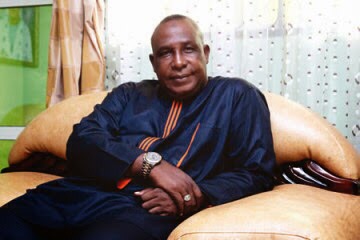 On the most recent edition of filmmaker, Tunde Kelani’s ‘Tunde Kelani TV’, the celebrated Cinematographer took his cameras to veteran actor Adebayo Salami aka Oga Bello and his wife.

This edition, which sees Oga Bello in a different light, reveals how he and his wife, Alhaja Ejide met.

The couple, who met while in Primary School, describe with smiles on their faces, how it was at the beginning.

Alhaja Ejide reveals that at the time, she could not stand the Nollywood star and detested him for his behaviour in School. She also adds that he tried to beat her always and that fueled her dislike for him.

Watch the duo go back to when it all started and trust me, you would fall in love over and over again…