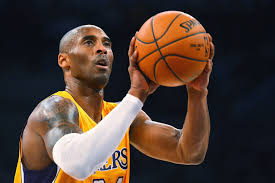 The Lakers legend began his 20 year career with the team and went on to win five championships and played in 18 playoffs.

In a time where loyalty among sportsmen is rare (yes this is Lebron shade), 37 year old Kobe Bryant remained loyal to the Lakers even after the exit of Shaquille O’Neil.

Several superstars turned out for the Mamba’s last game with the Lakers including Kanye West, Kendrick Lamar, Schoolboy Q among a host of others.

Kobe received Hollywood treatment as his numbers ‘8’ and ’24’ were inscribed on the floor at the Staples center venue of his last match.

As it turned out, Kobe delivered a memorable last performance, scoring 60 points as the Lakers beat the Utah Jazz 101-96.
After the game, an excited Kobe Bryant said, I can’t believe how fast 20 years went by. This is crazy. This is absolutely crazy.

Its definitely been a joy to watch the Hall of famer, so much so that not many cared about the Golden State warriors making history (their match was on at the same time as the Lakers).