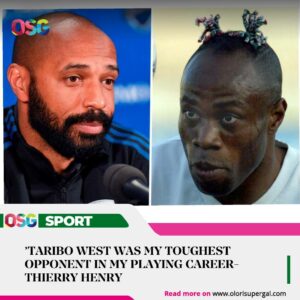 Former French and Arsenal Player, Thierry Henry has picked Nigeria’s Taribo West as the toughest opponent of his career.

The World Cup winner is one of the few players inducted into the premier league hall of fame. The Gunners’ all-time goal soccer was renowned for wreaking havoc on defences for club and country during his professional career which spanned over two decades.

Henry has pitted his wits against some of the world’s best centre-halves and full-backs during his active career, but he claims that the former Super Eagles star gave him his most difficult examination.

Toughest as indirect opponent? Or just a guy you don’t like to play against? Paul Scholes.

“For direct opponent, I would go back in the days – Taribo West.
“Because [at Auxerre], they did man-marking. He followed you everywhere, even in the dressing room.”

During his spell at AS Monaco, the Frenchman came up against West who was representing AJ Auxerre.

Following Henry’s move to Juventus, he came up against the defensive lynchpin again, who was plying his trade at Inter Milan having joined the Italians on a four-year contract in June 1997.

Although West won two Coupe de France titles and one Ligue 1 diadem with Auxerre, the Olympic gold medallist had disclosed that his deal with the Diplomats was signed “without knowing the content and conditions binding the contract”.
“I played in Auxerre for free,” West said at Footballers Connect, a conference aimed at educating aspiring footballers.