Nigerians, Here’s How You Made Olajumoke A Star

Stop looking back, you did. Yes, you.

Much has already been said about Olajumoke and her fairytale rise to prominence. She has been the talk of the town for a sea of reasons since her picture, if we can call it that, interrupted our world sometime in January.

From initially being mistaken for a model, to being recognised as the breadseller deserving of runways and billboard, hers is a classic example of a fairy tale. 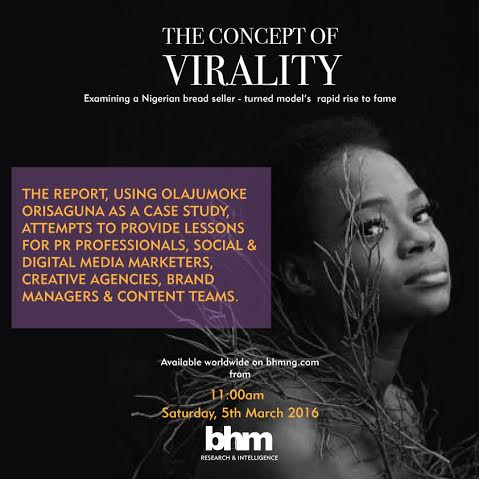 Expectedly, a lot of theories have been expounded to explain her sudden rise to prominence almost within a twinkle of an eye.

From hardwork, to chance, to luck, to prayers, to God, to courage and what have you, many are the things and people that have received credit for Olajumoke’s rise to grace from grass.

But research has shown that one person has not been given due credit. You.

So Nigerian company, BHM that decided to find out what made #Olajumoke go so viral. The answers are quite interesting.

First, they found that the medium on which the now famous first photograph which featured Olajumoke and her tray of bread was shared contributed to how far her story travelled. Why? Because studies have shown that some media make it easier for people, including you, to share stuff than others. Instagram and Twitter fall in that category and those were where Olajumoke’s photographs debuted.

Second, they found that her story “had the ingredients for a hearty virality soup”. Simply put, because that famous photograph pictured Olajumoke, then unknown, doing something big, “modelling”, it was easier for people to connect with it and share. Yes, other studies show that the presence of an amateur doing inspirational things, or a professional doing the mundane evoke the emotions that influence virality.

They also found that the novelty of her story, the presence of notable personalities, TY Bello and Tinie Tempah, amongst other factors contributed to the big bang Olajumoke achieved.

Have you seen how you made her a star?

Tinie Tempah might have been the reason for the photoshoot, TY Bello might have taken the perfect shot, Olajumoke definitely could not have chosen a more perfect time to bomb the shoot, still we won’t be talking about Olajumoke without you.

Nigerians still cannot get over the phenomenon that is Olajumoke, and with good reason… her case is so interesting that a lot of people have been using her as a point of contact for Baba God to #PickUp.

But wait, let’s think about it without involving religion, if Baba God has not picked up, why not just start your own damn phone company?

Viral cases like Olajumoke’s ‘miracle’, phenomenal as it seems, happen around us everyday, we wonder how they come to be, we wonder what jazzthe person is using, whereas in the end, when closely observed, these things are determined by certain factors.

Not to totally remove you from the subject matter, we are talking about cases going viral, not randomly hawking bread onto a photo-shoot. Okay… moving on.

WHAT MADE #OLAJUMOKE GO SO VIRAL?

This video of Bear Vasquez on Youtube has over 40M views, there is nothing interesting about this video, it just shows a guy shouting “oh my God see the rainbow” over and over for 3 minutes. However this video didn’t go viral until Jimmy Kimmel tweeted something about it. Basically, some ‘influencers’ must be part of your viral mix for your story to actually go viral and reach a larger audience. In the case of Olajumoke it was Tinie Tempah, in the case of Justin Bieber it was Usher, in the case of Kim Kardashian’s sex tape, it was Ray J.