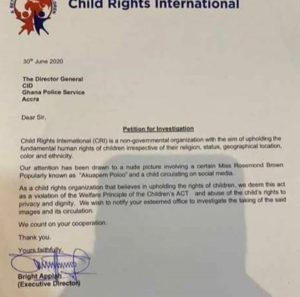 Actress Akuapem Poloo went completely nude in a photoshoot with her son and posted the picture on June 30, 2020 when her son was celebrating his birthday. The picture generated a lot of social media backlash at the actress; after which the actress took the picture down and apologized to the public.

However, the Child Rights International won’t take an apology for an answer as the organization has written a petition to the Ghana police to probe the actress over her nude picture with her seven year old son. The organization further deemed her act as a violation of the principle of the Child Act and abuse of a child’s right to privacy and dignity.

Celebrating Burna Boy as He Turns a ...