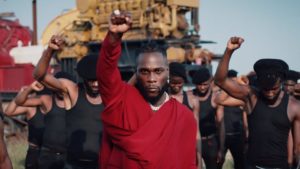 On Tuesday at the BET Hip Hop Awards, Nigerian singer Burna Boy was joined by Coldplay’s Chris Martin to pay tribute to victims of police brutality.

The musicians performed the hit song ‘Monsters You Made’. The song is featured on the Twice As Tall Album. They performed with a full band with a TV screen showing EndSARS protests in Nigeria.

After their performance, the background performers came out in a shirt that reads “Stop Police brutality”