Residents Keep Vigil In Banks To Use Atms 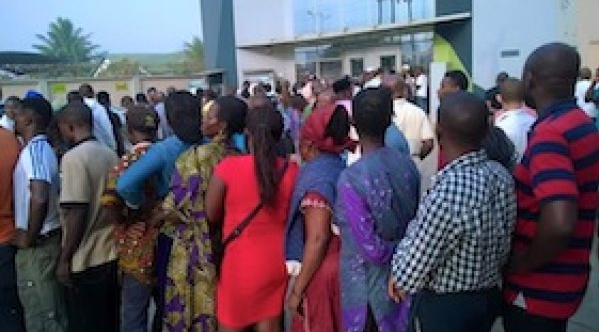 Barely 24 hours to Christmas, residents of Benin city are keeping vigil in the banks to use Automated Teller Machines (ATMs).

Few of the ATMs in some banks visited in Benin on Saturday were dispensing cash.

Many of the residents said that they had been in some of the banks as early as 5a.m.to avoid the crowd that would arrive in the bank premises later.

They also raised concern about their suffering in getting access to the machines which they alleged were not even fed with enough cash for the day.

For instance, Mr John Ebidah, said people had been exposed to risk all in attempts to withdraw money via ATMs.

He called for the relevant authorities to urgently look into the matter, especially bank managers in Benin.
Another resident, Mr Osato Owie, alleged that the banks deliberately refused to put enough money in the machines.

“I don’t understand how one, with his money in the bank, can find it extremely difficult to make use of ATMs.

Similarly, Mrs Nkechi Goddy-Asekomhe, said after several attempt at making use of the ATM, she met with one official of a particular bank.

“He told me that it was because of the cash challenges that made the bank to load few ATMs,’’ she quoted the official.
NAN