Fayose Becomes the Nwannedinanba 1 of Ndigbo 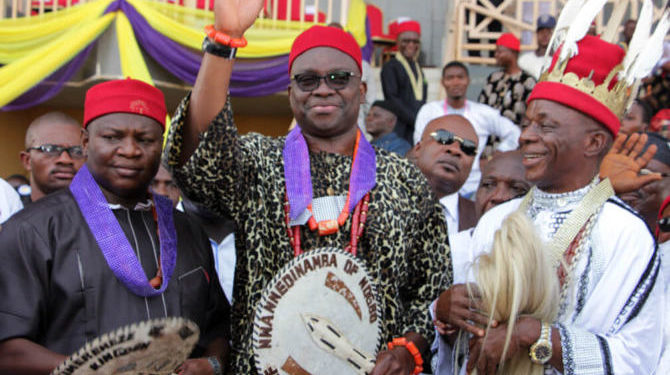 The Ekiti State Governor, Ayodele Fayose, was on Saturday conferred the title, Nwannedinanba 1, by the pan-Igbo group, for defending the cause of the common man and for making every Igbo man that comes his way successful.

Nwannedinanba 1 of Ndigbo which means: “Friend of the Igbo people,” was conferred on Governor Fayose during the celebration of the 2016 Igbo Cultural Day in Ado-Ekiti, Ekiti State.

Speaking on why the Igbo nation is honouring the governor as their friend and of the common man, the President, Ohanaeze Ndigbo in Ekiti State and the South West, Chief Nathaniel Uzomah, said Fayose was recognized for being the voice of Igbo people and Nigerians at large.

Uzomah’s words: “When many Nigerian leaders decide to keep quiet in the face of oppression of Igbo people, Governor Ayodele Fayose is there to speak and serve as the voice of the voiceless.

“He is showing great love for us and has given opportunities to Igbo people in his administration and with the permission of His Royal Majesty, Eze Chukwuemeka Eri, the Akaji Ofor Igbo 34 Eri Kingdom, we are conferring the title of Nwannedinanba 1 of Ndigbo on Governor Ayodele Fayose today.”

Uzomah said Igbo people were contributing politically and socially to the growth and development of Nigeria.

He solicited the support of the governor for his people’s efforts to buy the abandoned Oba Adejugbe Market along Poly Road to serve as Igbo Market in the state.

The Eri, who has spent 40 years on the throne as a first class Igbo monarch, praised Fayose for speaking the truth to power in order to defend the cause of the masses, saying: “We admire your courage to speak the truth and defend the masses.

“We pray the good Lord will take you higher than your ever dream for.

“We are solidly behind you and love you dearly.”

Speaking on the occasion, the governor, who commended the Igbo people for their industry, said among the various ethnic groups in the country, the Igbo stood out for their resilience.

Fayose said: “You are wonderful people from a wonderful nation.

“God forbid bad thing, if Nigeria breaks, it is only the Igbo nation that can stand economically.

“You are very industrious and widely travelled and take a lot of risks.

“If there is anything called Made in Nigeria, it is done by Igbo people.

“I don’t like chieftaincy titles, but for the love I have for you, I am taking this.

“Don’t be dismayed by what is happening in the country now.

“It is only God that protects and today most leaders are over protecting themselves against the people who voted them into office.

“I am very accessible because there is nothing to hide.”

Governor Fayose also urged Igbo people and Nigerians at large to live in peace and unity.

Apart from the title given the governor, he was also honoured with an award for good governance.

The Ekiti State Deputy Governor, Dr. Kolapo Olusola, was also given an award for his support to the Igbo people.