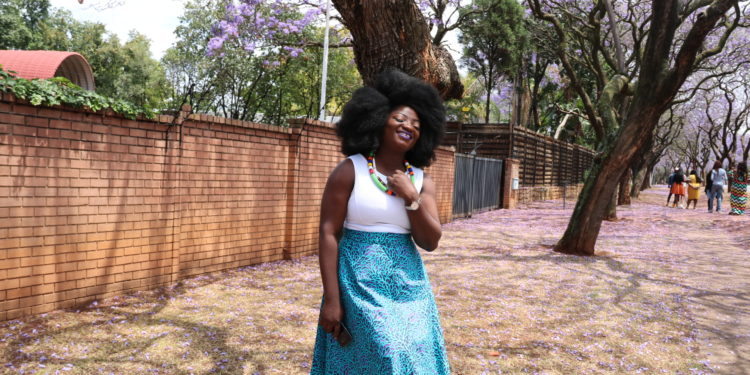 I woke up well rested and glanced at the itinerary for today: a tour of the Jacarandas and a press conference in Johannesburg.

Right! Today, the press briefing heralding the 2016 MTV Africa Music Awards (MAMA) will hold in another part of the Gauteng province. The Awards show had been gathering momentum for months all over Africa and especially in Nigeria where most of the nominees hail from. It is therefore only right to provide ‘home support’ for our Nigerian stars vying alongside other African counterparts. As a matter of fact, this tour was deliberately planned to fall in the same week as this major African music event. So, aside from exploring the rich culture and scenery in S.A, we are also here to attend the MAMAs.

On your marks, Ready…

The activities for today started immediately after breakfast and Kingsby was ready to leave behind anyone who would delay the group from keeping to schedule. I had sufficient time to dress up in my Ankara outfit with Zulu neck pieces. Today is Friday and I needed to feel tradition. For me, it’s about showing respect for where I am coming from and where I am. Mixing pieces of two different origins was really cool and my Afro hairdo made it perfect.

My Afro caused a lot of attractions from guests at the hotel and total strangers outside. It felt good.

Our Jacrandas tour began at the CBD area of Pretoria, also known as Tshwane. It was really exciting seeing this purple shelter everywhere. The Jacaranda tree is indigenous to Brazil but it now grows all around Pretoria. It is particularly in full bloom from late September to middle November. This explains why the face of Pretoria city turns purple in this season. It is so breathtaking. Over 70, 000 Jacarandas are estimated to be growing around the many streets, parks and gardens of Pretoria.

Coincidentally, I’m donning a purple-based Ankara skirt. It feels good to be in sync with the cosmos. God himself, must have handpicked my outfit for today and I feel really blessed.

After we had enough of the ‘purple feeling’ we went straight to the Union Building.

Hennie, our guide from Day 1, told us the history of Pretoria; how the South African Republic runs today; the different parliaments; and also a little bit about when Nelson Mandela was tried. We had a brief stop at the late elder statesman’s 9Metres high statue which towers on a large expanse of beautiful landscaping of the Union Building. I shared videos from this encounter on Instagram and Facebook to catch up with time.

We left the union building for lunch at Baobab restaurant located  at Menlyn Shopping Centre, Atterbury Rd, Pretoria. Lunch was delicious. I had chicken liver for starters and  chicken with fries and lamb chops as main course. I completed the culinary journey with a decent wash of Boabab sunset cocktail.

After lunch,  the media team from Nigeria headed to Johannesburg for the 2PM press conference at Hilton, Sandton. Traffic heading into Jo’burg was so heavy hence we arrived quite late. Nonetheless, we teamed up with the rest of our African colleagues for the world conference.

After the conference, one of the event sponsors hosted a cocktail party. I had a few drinks and my touring group headed back to Pretoria to meet with the rest of us.

On arrival, we had dinner at the hotel dining where I also experienced some minutes of fame. Other diners at the hotel saw me and marveled so much at my Afro that they asked to touch it. Ameyaw Debrah did the honors of taking a video. Thanks Ameyaw.

After dinner, Didier and Mohammed Tanko joined us for the night life experience in Pretoria.