NJC to hold emergency meeting over DSS raid on judges 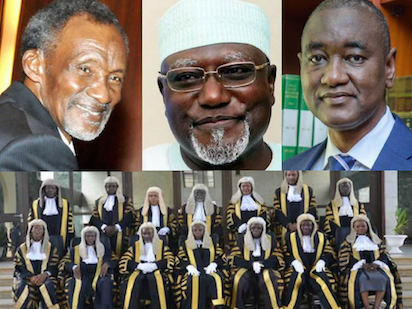 At least seven judges were detained by Nigerian security forces over the weekend in connection with allegedly receiving bribes, drawing sharp condemnation from the bar association and from rights groups who described the raids as “unprecedented”.

In response to the public outcry, President Muhammadu Buhari’s spokesman was forced to defend the raid, saying on Sunday that the executive followed due process and insisting Buhari is a “committed democrat.”

“It is indeed very saddening and deeply regrettable, the distressing and unfortunate incident which occurred on Friday 7 October and Saturday 8 October, 2016,” said Chief Justice of Nigeria Mahmud Mohammed in an Abuja court.

“However, I must ask all Nigerians to remain calm and prayerful, as an emergency meeting of the National Judicial Council, which will take place tomorrow, will comprehensively look into the matter.”

In his remarks, Mohammed praised the Nigerian Bar Association head Abubakar Mahmoud, who condemned the swoop as a “Gestapo-style” operation.

Buhari, a former military ruler, was voted into power last year on an anti-graft platform.

But critics have claimed his corruption war is being used as a front to sideline political foes.

“The whole world is watching and the explanation by the executive is unacceptable,” said senior lawyer Adegboyega Awomolo in a statement.

“We believe in the war against corruption but the rule of law must be obeyed.”

Human rights lawyer Clement Nwankwo said that the crackdown on the judges was “unprecedented” in Nigeria.

“I have not seen anything like this before. A large-scale coordinated arrest of judges across the country is unprecedented,” Nwankwo said.

“Under the days of military rule you didn’t have judges being arrested this way.”

Since coming into power a year ago, Buhari has kept political opponents — including pro-Biafra activist Nnamdi Kanu and ex-national security advisor Sambo Dasuki — in jail despite court orders granting bail.

Nwankwo said the Buhari government’s disregard for the law served only to undermine its war on corruption.

“When you continue to violate due process then the war can only become weaker,” he said.

“All of this is ad-hoc and temporary, so ultimately there is no lasting reform.”