Unbelivable! A Chinese man spent two year on the road just to watch the Olympics

A Chinese man has taken the love for the Olympics to another level by pedaling his rickshaw all the way from China to Rio, just to see the Olympics, and he spent two years on the road.

Meet Chen Guanming, a 60-year-old Chinese farmer who pedalled his rickshaw all the way from China to Rio. He calls himself “Olympic madman,” and surely he deserves it: this is the third Olympic Games he rode to. 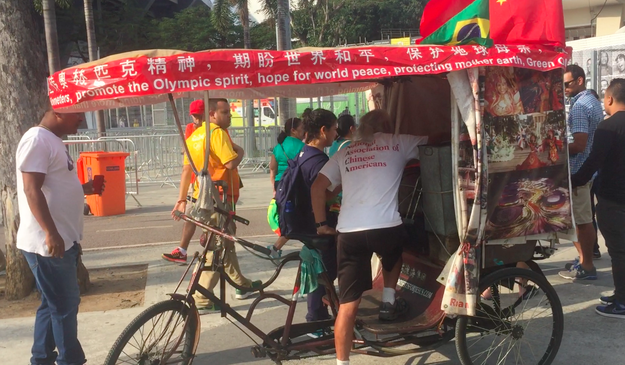 Brazilians welcomed him with the best friendship and a splendid show after he arrived Rio a week earlier.

Seventeen years ago, he embarked the crazy adventure as an Olympics chaser: he toured around China before attending the Beijing Olympics in 2008, then made it to London in 2012, and now he’s in Rio. He plans to finish his global journey in Tokyo for the 2020 Olympics. 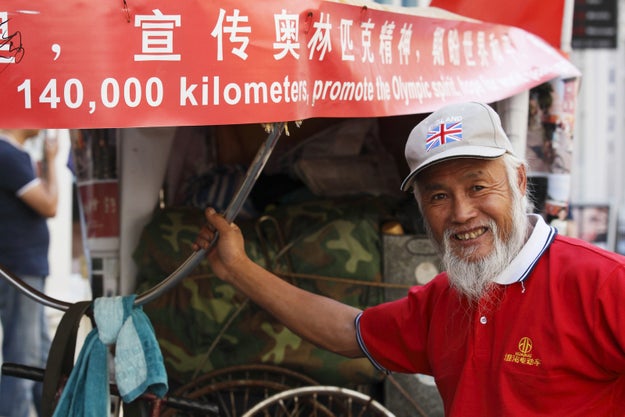 He doesn’t really have money, but strangers he met on the road have been pouring support to him: a heart-felt encouragement, a warm meal, or a lift up a hill — the rickshaw, his good buddy, carries all his luggage and weighs as heavy as 400 pounds. 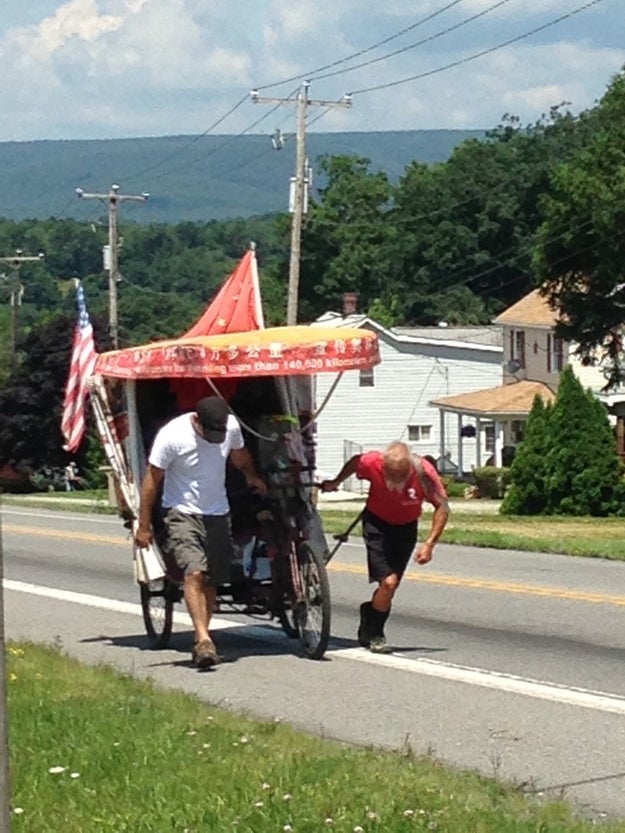 Zsofia Korodi, a Hungarian living in London, set up aFacebook fan page after being “inspired by his actions,” so that supporters keep track of him.

That way his journeys are pieced together, and people call out the next town to look out and take care of him. 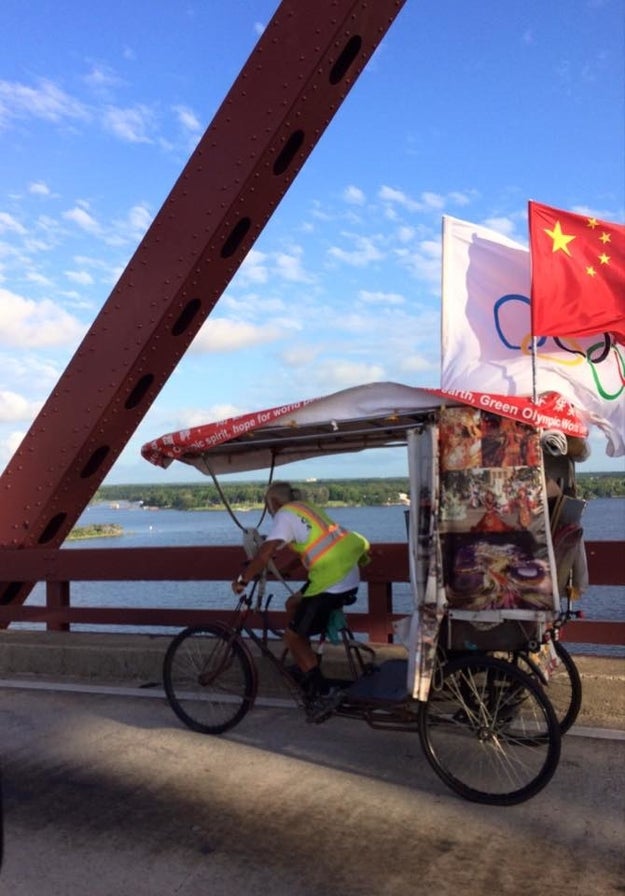 When there’s water to cross, people he met fly him over, and he will patiently wait for the rickshaw to arrive by ship. 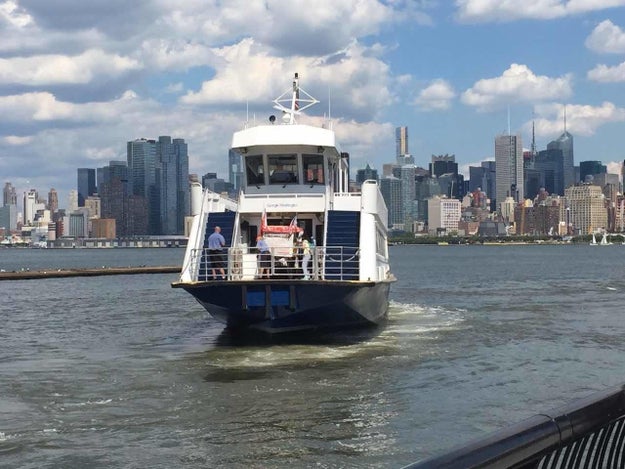 Chen spent two years, traveled almost 40,000 miles to get to the London Olympics. For Rio, he hopped a plane to Canada and then made his way from Canada through the US, South America to Rio. 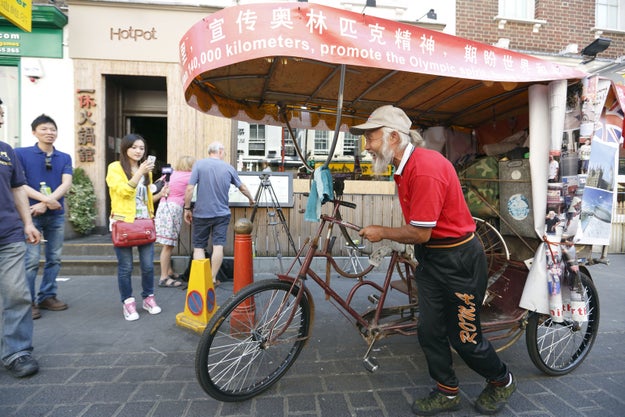 Chen said he does it all to promote the Olympic spirit. “My biggest hope is to encourage the vulnerable, the weak, and those who are afraid of challenges.” 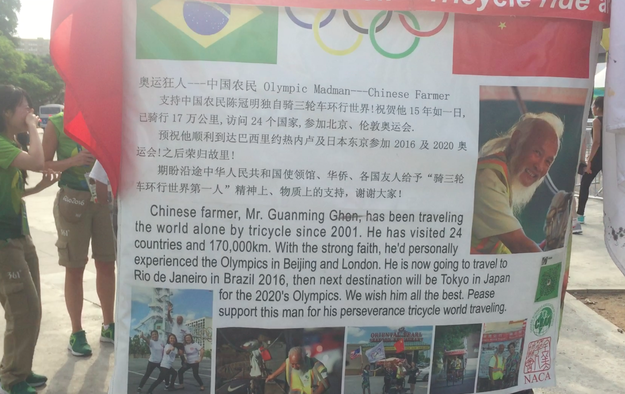 “[I want them] to stand up, to face the difficulties, and to overcome themselves, with my experience of being encouraged, recognized, and supported by people from all around the world. The virtuous circle will bind friendship deeper and bring together peace.” 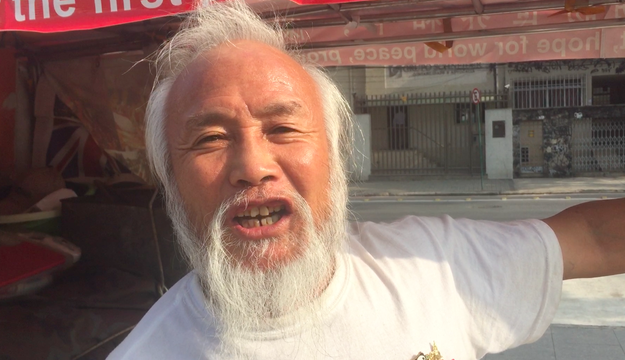 In Rio, he’s apparently becoming an Olympic celebrity — a sportsman that compete out of the fields, with himself. 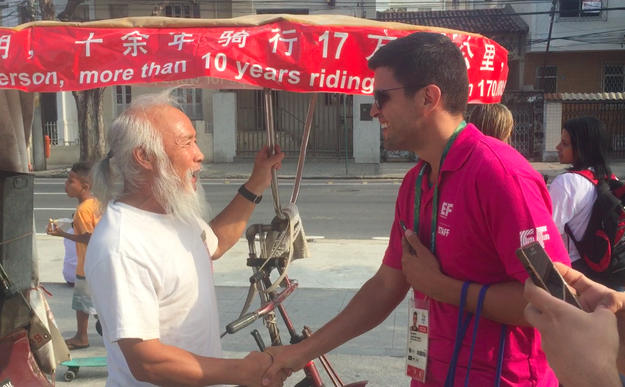 And gets stopped wherever he goes to take pictures. 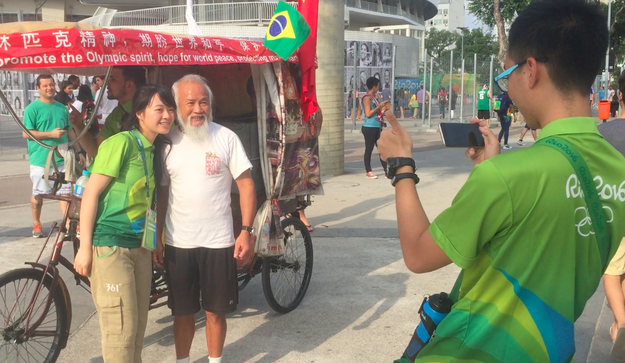 Even though he couldn’t watch the games at the scene, he’s completely happy by helping to pick trashand clean the surrounding areas of the stadiums. That’s what the Olympics are about, to use his own words, “to challenge the boundaries, to compete in a friendly manner, and to win the honor of the higher calling.” 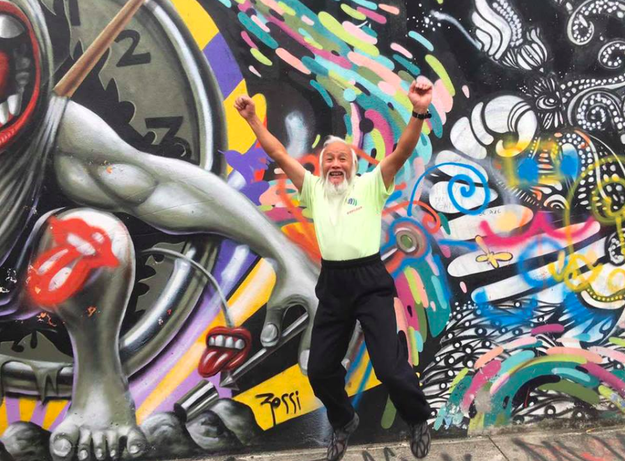 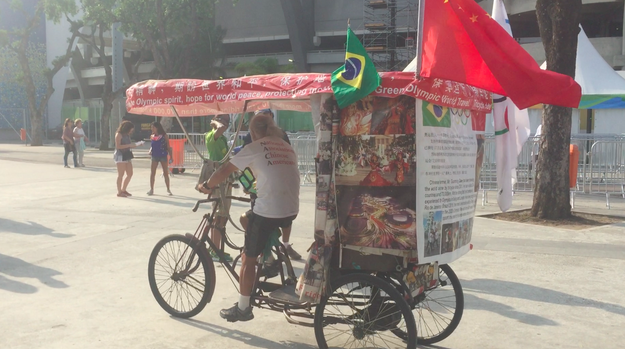