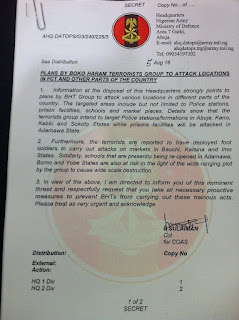 The Nigerian Army has placed its officers and soldiers across the country on red alert, following ‘very credible’ intelligence that Boko Haram terrorists have concluded arrangements to attack the Federal Capital Territory, FCT, and other sensitive areas across the country.

According to the intelligence, Boko Haram terrorists plan to bomb areas with large gathering of people, such as markets, schools, among others.

In a statement released by the office of the Chief of Army Staff, Lt. General Tukur Buratai, to  military formations in all parts of the country.

“The targeted areas include but not limited to police stations, prison facilities, schools and market places.

“Details show that the terrorist group intend to target police stations and formations in Abuja, Kano and Imo states.

“Similarly, schools that are being re-opened in Adamawa, Borno and Yobe states are also at risks, in the light of the wide ranging plot by the group to cause large-scale destruction.”

“In view of the above, I am directed to inform you of this imminent threat and respectfully request that you take all necessary proactive measure to prevent Boko Haram terrorists from carrying out these heinous acts.”