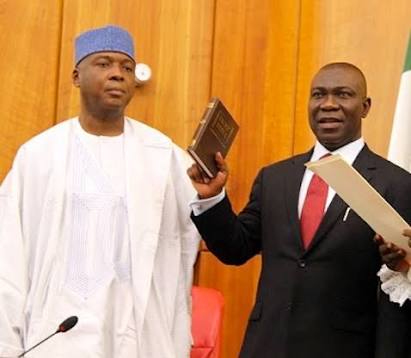 The Deputy Senate President has writen a letter to the EU, UK and America notifying them that Nigeria’s demoxracy is at risk, this is coming less than two days after the arraignment of Senate President, Bukola Saraki; his deputy, Senator Ike Ekweremadu, and two others for forgery at an Abuja high court.

Ekweremadu in his letter, informed the United Nation, governments of the UK and USA, the European Union parliament and foreign missions, that the legislative arm of the Nigerian government was being rubbished by President Muhammadu Bihari’s government.

He further said Nigeria’s democracy is in danger, saying that the their trial for forgery of Senate Standard Rules is an attempt by the presidency to silence him as the leader of Nigeria’s main opposition party.

The letter was titled: “Re: Trumped Up Charges Against the Presiding Officers of the 8th Senate: Nigerian Democracy is in Grave Danger.”

Ekweremadu wrote: “You may further wish to judge for yourself whether this unfolding scenario, coupled with the clampdown on the opposition, such as targeted arrests and indefinite detention of opposition figures and dissenting voices, in spite of court pronouncements and in clear violation of the Nigerian constitution, as well as the sustained marginalization of the South-East and South-South geopolitical zones of Nigeria, does not constitute a grave danger to the nation’s hard-won democracy.”

“I wish to forward to you the court summons containing the trumped-up charges preferred against my person, the President of the Senate, Senator Bukola Saraki, CON; and two others.”

“I also wish to appeal to you to kindly find time to read through the annexures— petition by members of the Senate Unity Forum, statements by persons interrogated, and the police report— to see if our names appeared anywhere in these documents.”

“You may, thereafter, judge for yourself whether the Federal Government, acting through the Attorney-General of the Federation, has any justification whatsoever to generate our names for trial. The list of the accused persons appears to have been politically generated because you cannot by the documents attached, relate any of our names to the offence for which we are now being charged.”

“Moreover, the rules and principles of fair-hearing have not been adhered to because the police have not interacted with me or the President of the Senate as at the time of writing this letter.”

“You may also wish to judge for yourself whether this trial orchestrated against me is not a political trial, calculated witch-hunt, barefaced intimidation, and a clear attempt to emasculate the parliament and silence me as the leader and highest ranking member of the opposition in Nigeria.”

“Meanwhile, it could also be recalled that an attempt was made on my life on November 17, 2015. The Nigerian security agencies did nothing, even though the incident was duly reported.’’

However, the presidency has said that it will not join words with the Deputy Senate President.

How Alade Aromire Inspired My Career – ...