For a first timer entering the byzantine city of Lagos, one of the things that might be striking to him or her is the ubiquitous traffic jams especially if he or she is coming from a less populated town or city. Lagos traffic jams are such that one cannot escape from them irrespective of the medium of transportation used in entering the city. The traffic jams seem like the welcome package the city offers you.

Traveling by air is the fastest, less strenuous and probably the most expensive mode of transportation, but the luxury and comfort end the moment one disembarks from the plane. Getting out of the airport alone sometimes can be as hectic as if one had traveled by road to the city. 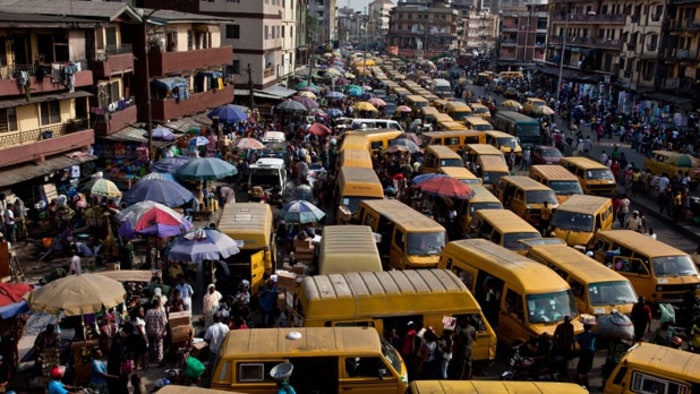 For those who cannot afford the luxury of flight ticket, road transport is more than the alternative. Most Nigerians make their journeys by road. Despite that most Nigerian roads have become death traps due to decades of neglect by successive governments, traveling by road still remains the cheapest mode of transportation.

From the vantage point of road traveler entering the city, the traffic jam might be experienced even before entering the city. The Lagos-Ibadan expressway, the major road that links Lagos to other parts of Nigeria, is arguably one of the overused roads in the world. And by the obedience of natural law that whatever that has been overused will reach it maximum utility sooner than expected, Lagos-Ibadan expressway has never been the ideal road a nation can be proud of. Traveling that highway is like walking through the precipice of a rock, that any loss of balance or concentration will result in falling off the cliff into the abyss.

But this article is not to address the pitiable state of our roads; it is set to address a more concerning issue that affects the little beings among us: the children who have made the roads their business empire.

Back to Lagos-Ibadan expressway (this article particularly focuses on the underage hawkers on that road). At the Mowe-Ibafo-Magboro-Arepo-Wawa sections of the road, a trailer had fallen with its loads littering some parts of the highway. This had caused serious traffic jam and motorists and other road users had spent hours on a spot; it was an absolute gridlock: no movement, everything was at a standstill, and the sun was also frowning.

But the pain of many looked like the joy of some – the highway hawkers of all sort of consumables; the majority of them were young boys and girls within the age of 8 and 15. And when there was a movement of vehicles, they ran as fast as they could to catch up with moving vehicles to either collect their money from a buyer or to give change to the buyer. They moved from one vehicle to another, whistling and shouting to advertise their goods. This always happens whenever there is traffic jam along that highway.

One wonders why these underage children are left to do this tedious and dangerous job on the highway where they could easily be run over by careless drivers. There have been cases of hawkers killed on the highways by hit-and-run drivers. The case of a 10 years old boy who was found dead on the road with his goods scattered some months ago attests to the fact that these child-hawkers are one of the most endangered species in Nigeria.

A keen look at what has led them to the highways will not only reveal the pitiable economic and social conditions of most households that these children come from, it will also expose the shame of a nation that turns blind eyes to the gradual degeneration of her future glories. 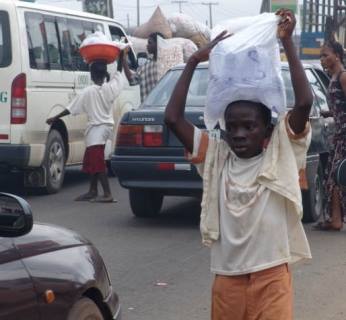 When asked why he was not in school, he said his mother could not afford to pay his school fees and buy him school uniforms. When asked every little child’s favorite question of what he wants to become in future, Biodun answered, with an enthusiastic smile on his face, that he would love to become a pilot. With an innocence that only childhood understands, he said when he grows up, he will make a lot of money and buy a plane for his mother, a beautiful dream whose fulfillment is clouded in uncertainty judging by his present condition. 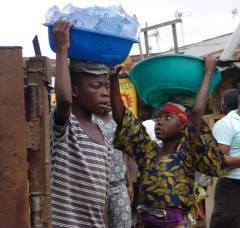 Like Biodun, Saheed, 9, hails from a broken home as well; he is staying with his father and step-mother. Saheed said his step-mother forces him to hawk on the road whenever there is traffic. Scrutinizing Saheed’s countenance, it revealed a boy whose life had just drifted from the beautiful to the ugly. He said, sadly, that his mother would not have allowed him to hawk in traffic if she was still with his father. Although he still goes to school, but he must hawk after school before he can eat.

It can be concluded that majority of these underage traffic jam hawkers in the streets and on the highway are products of broken homes where proper parental care is non-existent, thus, these children become the bread winner for themselves. At a tender age, they are exposed to the harsh realities of life.

These children most times are preys to kidnappers and ritual killers; and if they escape the susceptibility of childhood, they end up becoming area boys and thugs who are always manipulated by politicians to perpetrate evils.

Diseases that can be contacted through kissing