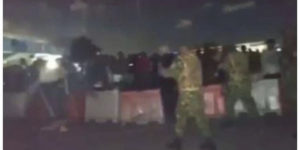 The Nigerian Army has clapped back at the Lagos State Governor, Babajide Sanwo-Olu after he accused them of opening fire at unarmed #EndSARS protesters at Lekki Tollgate last week.

It would be recalled that over the weekend Sanwo-Olu told CNN that the Nigerian Army is responsible for the massacre as depicted in a video footage telecasted on the station.

Reacting to this, the Public Relations Officer of the Nigerian Army, Osoba Olaniyi pointed fingers at Sanwo-Olu claiming he ordered them to come and intervene in a statement released to the media.