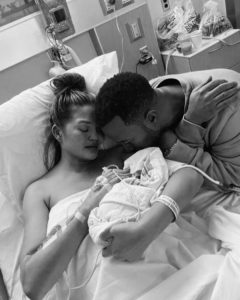 Chrissy Teigen is opening up for the first time about the loss of her and John Legend’s third child, Jack.

Weeks after the tragedy, the 34-year-old model posted an essay recounting her and Legend’s final moments with their son as well as a message for those who criticized her for posting photos on social media during that time.

Teigen explains that her doctors had diagnosed her with partial placenta abruption,  which is when the placenta separates from the wall of the uterus before birth. If this happens, the baby may not get enough oxygen and nutrients in the womb. This can also cause serious bleeding, which Teigen also experienced.

Teigen says she came to terms with the fact that she “would have an epidural and be induced to deliver our 20-week-old, a boy that would have never survived in my belly (please excuse these simple terms).”

“After a couple nights at the hospital, my doctor told me exactly what I knew was coming — it was time to say goodbye. He just wouldn’t survive this, and if it went on any longer, I might not either. We had tried bags and bags of blood transfusions, every single one going right through me like we hadn’t done anything at all,” she recalls.

“Late one night, I was told it would be time to let go in the morning. I cried a little at first, then went into full blown convulsions of snot and tears, my breath not able to catch up with my own incredibly deep sadness. Even as I write this now, I can feel the pain all over again. Oxygen was placed over my nose and mouth, and that was the first picture you saw. Utter and complete sadness.”

Remembering their last moments with Jack, Teigen writes, “My mom, John and I each held him and said our own private goodbyes, mom sobbing through Thai prayer. I asked the nurses to show me his hands and feet and I kissed them over and over and over again. I have no idea when I stopped. It could have been 10 minutes or an hour.”

Teigen also shares why it was important that she have Legend and her mother, Vilailuck, take photos. “I had asked my mom and John to take pictures, no matter how uncomfortable it was. I explained to a very hesitant John that I needed them and that I did NOT want to have to ever ask. That he just had to do it. He hated it. I could tell. It didn’t make sense to him at the time,” she writes.

As for those who criticized her for posting some of those pics, Teigen stresses that she has no time for those remarks.

“I cannot express how little I care that you hate the photos. How little I care that it’s something you wouldn’t have done,” she laments. “I lived it, I chose to do it, and more than anything, these photos aren’t for anyone but the people who have lived this or are curious enough to wonder what something like this is like. These photos are only for the people who need them. The thoughts of others do not matter to me.”

Teigen does admit that she has some regret sharing so much but explains why she had to do it. “I feel bad our grief was so public because I made the joy so public. I was excited to share our news with the world. Stories leading up to this had been chronicled for all. It’s hard to look at them now. I was so positive it would be OK. I feel bad that I made you all feel bad. I always will.”

She also shares that she and Legend have not yet buried Jack. “All I know now is his ashes are in a small box, waiting to be put into the soil of a tree in our new home, the one we got with his room in mind.”

Teigen concludes her emotional essay by expressing why she chose to write the piece in the first place. “I wrote this because I knew for me I needed to say something before I could move on from this and return back to life, so I truly thank you for allowing me to do so,” she states.

“Jack will always be loved, explained to our kids as existing in the wind and trees and the butterflies they see. Thank you so much to every single person who has had us in their thoughts or gone as far as to send us your love and stories. We are so incredibly lucky.”