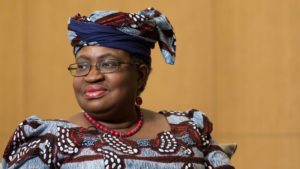 The World Trade Organization is set to be run by a woman for the first time in its 25-year history after it was announced that the final choice to be its new director-general will be between South Korea’s Yoo Myung-hee and Nigeria’s Ngozi Okonjo-Iweala.

Britain’s former international trade secretary Liam Fox failed to make the final shortlist as the number of candidates was whittled down from five to two.

The protracted battle to secure one of the plum international jobs will be decided early next month, with the winning candidate faced with a number of pressing problems.

Fox, despite support from the US, failed to muster sufficient backing, leaving the choice between a seasoned trade official in Yoo and a candidate in Okonjo-Iweala who says the organisation needs a fresh pair of eyes.

The other unsuccessful candidates in the second phase of a race that began with eight hopefuls were one of the original favourites, Kenya’s Amina Mohamed, and Saudi Arabia’s Mohammad Al-Tuwaijri.

Okonjo-Iweala has served two terms as Nigeria’s finance minister and has also been her country’s foreign minister. Having also been the number two at the World Bank, she is running as an outsider and as the candidate to give the WTO fresh political momentum.