There has been a spike in the rate of internet penetration in Africa, buoyed by the growing youthful population on the continent. This new trend has also been underpinned by network operators’ continued investment in network infrastructure, doubling down on fast internet technology.

According to a new report by GSMA Intelligence, at the end of 2019, 477million people in Sub-Saharan Africa subscribed to mobile services, accounting for 45 per cent of the population.

The report forecasts that the mobile market in the region will reach several important milestones over the next five years: half a billion mobile subscribers in 2021, 1 billion mobile connections in 2024, and 50 per cent subscriber penetration by 2025.

With the increasing use of mobile internet users, the number of social media platform applicationshas also grown exponentially on the continent.

Some of these apps, that have grown in popularity are used for instant messaging, media sharing, microblogging, social and business networking.

According to Mary Meeker, an influential Internet analyst, mobile Internet and social media are the fastest-growing areas of the technology industry worldwide.

A recent study also suggests that when Africans go online (predominantly with their mobile phones) they spend much of their time on social media platforms. Sending and reading emails, reading news, and posting research queries have become less important activities for African mobile users.

The story is not different in Nigeria, Africa’s biggest economy, a recent report by Plaqad, an innovative marketing, and public relation technology company, titled “Influencer Compensation Report 2020” revealed that approximately 24.59 million social network users in Nigeria as of 2019.

It also estimated that the number of users will rise to 44.63million users in 2025 with each user visiting at least one social media platform each day.

Although other social media platforms such as TikTok, Linkedin, and Snapchat have continued to see more influencer activities.

The SA Social Media Landscape report, South Africa’s largest annual study of social media trends, revealed that Facebook remains the social platform of choice for marketing – but TikTok is rising fast among both brands and consumers.

According to the 2020 edition of the report, almost a third of major brands intend to become active on TikTok, which is also the fastest growing social media platform among consumers. Fewer than 20 per cent of brands have used it in the past year, but none believe they are doing so very effectively.

It is estimated that around 6million South Africans are already using the platform. Nine out of ten major brands – just more than 89 per cent – indicated they were active on Facebook, versus 77 per cent on Twitter, 75 per cent on LinkedIn, and 68 per cnet on Instagram.

Twitter and Instagram both showed strong growth in the past year, each reaching a user base of about 9million.

Data analysed for the SA Social Media Landscape 2020 report from the Target Group Index (TGI), a research survey among 30,000 South Africans conducted by Ask Afrika, shows that just over half of Instagram and Twitter users at 4.7million on each – are highly active on these platforms.

In Kenya, a powerhouse in the East African region, similar to what is obtainable in South Africa, social media is rapidly growing in popularity in Kenya. 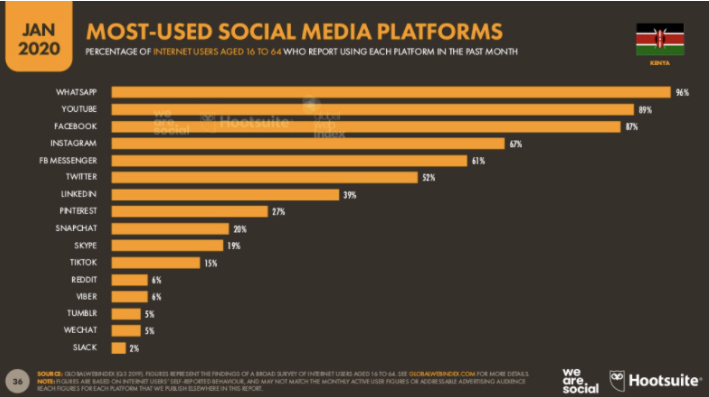 Twitter more than doubled its user base in Kenya in the last year. In terms of brands and marketing, companies are starting to take full advantage of all social has to offer.

They’re moving into using social media as a communication tool, paying for advertisements on social media, creating video and other content, marketing via mobile, and integrating shopping features directly into their social media.

In Egypt, Facebook is the social media platform of choice. The use of social media and online platforms is growing significantly across the Middle East and North African region, particularly due to the region’s youthful demographic, Crowd Analyzer’s State of Social Media 2019 report shows.

Egyptians aren’t as active on Twitter when compared to their activity on Facebook and Instagram. The platform only boasts approximately two million users within the country.

Twitter users in Egypt are more likely to post in Arabic (only 430 000 users chose to tweet in English), and men are more active on the platform than women.