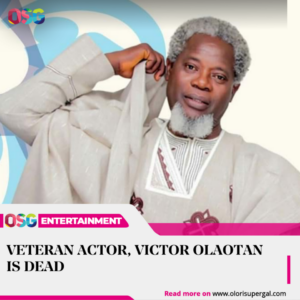 The news was made known by the actor’s publicist, Demola Sanyaolu, on behalf of his family.

Victor was best known for his role as Fred Ade-Williams in the popular TV series, Tinsel. He has been bedridden for five years after he was involved in a ghastly accident.

It is recalled that in 2018, the veteran actor, requested financial assistance to facilitate his treatments outside the country, after two years of being incapacitated.

Nigerian billionaire, Femi Otedola, agreed to settle his bill of about N39m, which the actor’s wife confirmed was paid directly into the account of the hospital he was treated in Turkey.