American comedian and actress, Kathy Griffin, has revealed that she has lung cancer. 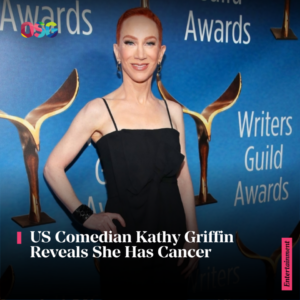 In a statement posted on Twitter, she said, “I’m about to go into surgery to have half of my left lung removed. Yes, I have lung cancer even though I’ve never smoked!”

The 60-year-old said her doctors were hopeful, as the cancer was stage one and confined to her left lung, and that she was not expected to have to undergo chemotherapy or radiation.

“I should be up and running around as usual in a month or less”.

Griffin’s career was briefly derailed in 2017, after she displayed a stunt with a prop depicting Donald Trump’s severed head.

However, she rapidly back-pedaled and apologized.

In an interview with ABC News, she spoke about the abuse she has received and how she was addicted to painkiller and even attempted suicide.

The comedian further wrote in her statement “The irony is not lost on me that, a little over a year ago, all I wanted to do was die. And now, all I wanna do is live.

She was vaccinated against Covid-19, she said, adding: “The consequences for being unvaccinated would have been even more serious.”

“Please stay up to date on your medical checkups,” she wrote. “It’ll save your life”.