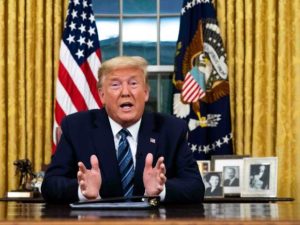 US President Donald Trump has said he is ending negotiations over a Covid-19 relief bill, and will only resume talks after the election.

He predicted he would win next month’s election and pass a bill afterwards. US stocks fell after the announcement.

“I have instructed my representatives to stop negotiating until after the election when, immediately after I win, we will pass a major stimulus bill that focuses on hardworking Americans and small business,” the president tweeted