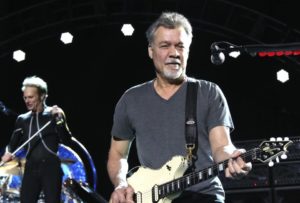 Eddie Van Halen, the virtuoso guitarist whose innovative and blistering solos helped propel the band named after him into one of rock’s biggest acts in the 1980s, has died of cancer. He was 65.

Van Halen’s son Wolfgang, who became the band’s bassist when it reunited in 2007, announced the news on Twitter on Tuesday.

“I can’t believe I’m having to write this but my father, Edward Lodewijk Van Halen, has lost his long and arduous battle with cancer this morning,” he wrote.

“He was the best father I could ever ask for. Every moment I’ve shared with him on and off stage was a gift.

“My heart is broken and I don’t think I’ll ever fully recover from this loss.”

Van Halen, born in 1955 in Amsterdam and raised in Pasadena, California, formed the band along with his brother Alex, bassist Michael Anthony and singer David Lee Roth in 1974, after the group