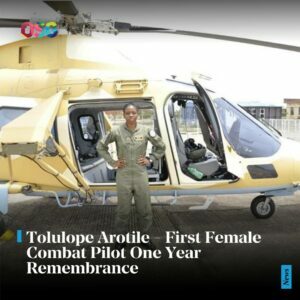 The Flying Officer, born December 13, 1995, died of head injury within the premises of the Nigerian Air Force (NAF) Base, Kaduna.

She was winged as the first female combat helicopter pilot on 15 October 2019 after completing her flying training in South Africa.

Just two years into her career, Arotile acquired 460 hours of flight, an exceptional milestone that, among others, earned her commendation from President Muhammadu Buhari.

The deceased was renowned for her gallantry and skills, which include flying fighter choppers to areas dominated by bandits and terrorists for aerial strikes.

According to the former Director of Information, Air Commodore Ibikunle Daramola, stated that its late officer was killed by a “reversing car”.