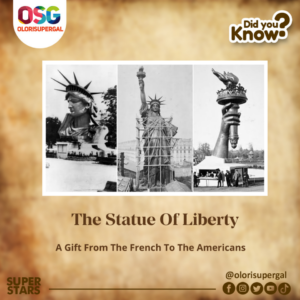 Frenchman Édouard de Laboulaye was a French jurist, poet, author, and anti-slavery activist who proposed the idea of presenting a monumental gift from the people of France to the people of the United States in 1865.

As an ardent supporter of America, Laboulaye wished to commemorate the centennial of the Declaration of Independence as well as celebrate the close relationship between France and America.

He was equally moved by the recent abolition of slavery in the U.S., which furthered America’s ideals of liberty and freedom.

Sculptor Frédéric-Auguste Bartholdi was in attendance for Laboulaye’s proclamation. Of like mind with Laboulaye’s cause, Bartholdi began conceptualizing the colossal structure that would soon be known as Liberty Enlightening the World.

Bartholdi’s design encompassed much symbolism: her crown representing light with its spikes evoking sun rays extending out to the world; the tablet, inscribed with July 4, 1776, in Roman numerals, noting American independence; to symbolize the end of slavery, Bartholdi placed a broken shackle and chains at the Statue’s foot.

Fundraising and bringing people together have always been integral to Lady Liberty’s history.

It began with efforts to finance this unprecedented undertaking. France would be responsible for creating the Statue and assembling it in the United States while the American people would fund and build the pedestal.

To raise funds in France, public fees, various forms of entertainment, and a lottery were used. In the U.S., to finance the pedestal, benefit theatrical events, art exhibitions, auctions, and prizefights were held. Poet Emma Lazarus wrote her famous sonnet The New Colossus in 1883 for an art and literary auction.

Construction of the Statue was completed in France in July 1884. The massive sculpture stood tall above the rooftops of Paris awaiting her voyage across the sea.

Back in America that same year architect Richard Morris Hunt was selected to design the Statue’s granite pedestal, and construction got underway.

For its trans-Atlantic voyage aboard the frigate Isère, the Statue was reduced to 350 individual pieces and packed in 214 crates. The ship arrived in New York Harbor on June 17, 1885. While awaiting the construction of its pedestal, the Statue remained in pieces on what was then called Bedloe’s Island. The pedestal was completed in April 1886 and finally, on October 28, 1886, President Grover Cleveland oversaw the dedication of the Statue of Liberty in front of thousands of spectators.

The story of the Statue of Liberty and her island has been one of change. The Statue’s own meaning and relevance have evolved with time as well. Perhaps most notable is the association with welcoming “huddled masses.”

In 1903, a plaque bearing “The New Colossus” was placed on the pedestal. With that Lady Liberty’s significance grew as an inspiration to immigrants who sailed past her on their way to America.