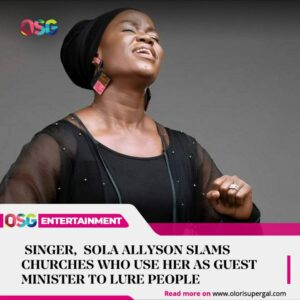 Nigerian gospel singer, Sola Allyson-Obaniyi took to her Instagram page to slam a church that used her picture as a guest minister for an upcoming programme.

She also seized the opportunity to address other churches who do the same thing by photoshopping her and tagging her for publicity without her permission.

On her Instagram page, she shared a picture of a church flier where she was photoshopped and tagged it a “lie”.

She said the church dared to tag her and use the lie to draw people to the event and they will still lie to people that the artist refused to show up.

“This is a LIE!!
And a punishable offence, both spiritually and in every way!!!

“How can you put me on an event I know nothing about? And you now dare to tag me! ?èbí if you didn’t tag me I wouldn’t have known!!

“How can you tell lies to draw people to your “church” event??? And then it’ll now be like “it’s the Artiste o she failed to show up after we’ve paid her, that’s what they do”!

“It would be okay if you invited me but not when you haven’t and I’m not supposed to be there!!!

“People do this and it must stop!! Not even the effrontery to tag me on a lie!!! And you’re supposed to “worship God” there!??

“THIS HAS TO STOP!!! BE HONORABLE! STOP RIDICULING THE FAITH”.

Responding to the fact that she called out the church and addressed the issue publicly, she noted that she has ignored many in the past and she gets negative feedback from an event she didn’t get a formal invite from.

“Should I not address it?

“I will address ittttt!
The tagger has a name. I found the name of the church. But I only chose not to display their names.

“You should thank God they even used your face”. Really?

‘And people like you can open your mouth to say the government is bad? It is only because you’re not benefiting from the rot!

“This is how you’ll just look away because, “thank God they even chose me”, tying it to “mo rí àánú gbà”, colouring grace, plastering deceit on it, passing down the rot to younger ones as life’s standard! Are those there not our neighbors and kindred?

“And the tagger of me was doing fùrùk?k? and abusing me. Who trained these children? I engaged because I thought in my pure heart that they’re honorable.

“But then, values are eroded on already with the ability to speak English! Emotional intelligence is zero. And these are “media people”. Ha. But anything to build their brand nàó, àbí? What about other people’s “brands”? How can you build your own brand via sharing lies that can defame others’ brands?

“Many, many of this thing happens. Too much. Those years when the knowledge of photoshop began, there was one where they put my music and wore another cloth on my body and one kain scarv on my head!!! Not to talk of what churches do now? How can we confidently ridicule the faith? Where is the fear of God?

“Court k??? In this system? Well, let’s begin from calling out lies first. It is because you and I have been keeping quiet. In your own “little” way, do away with lies and purge it from your own space. We’ll have a better society.

“And all of you are complaining and cursing about bad government? Are we not all in the same society? Who is the government?

“? wòó, I’ve addressed it nìy?n o. No dart hurled against me can enter. No curse can come on me, àj?sànra ni! Nothing can tarnish my integrity if I don’t tarnish it myself.