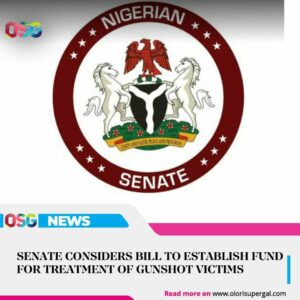 The Senate has considered a bill seeking to amend the Compulsory Treatment and Care for Victims of Gunshots Act, 2017.

The bill among others seeks to establish the Medical Emergency Assistance Fund to cover the treatment of victims of gunshot, knife wounds, and other life-threatening emergencies.

The bill was sponsored by Senator Oluremi Tinubu who said that the intent behind the Compulsory Treatment and Care for the Victims of Gunshots Act, 2017, was to enforce treatment for victims of gunshots injury.

She noted that before its enactment, victims of gunshot injuries were being refused treatment by hospitals, as a result of a misinterpretation of Section 4 of the Robbery and Firearms (Special Provision) Act 1990.

However, the lawmaker, explained that the Compulsory Treatment and Care for Victims of Gunshot Act, 2017, provides that every hospital, public or private shall receive for treatment, with or without police clearance, with or without monetary deposit, persons with gunshot wounds, and criminalizes contravention.

Furthermore, she said the Act provides a mechanism for reporting treatment of persons with gunshot wounds to police and precludes persons from being the subject of embarrassing interrogation for helping victims.

She said, “It is however shocking that in spite of the Act, the flagrant disregard of human life continues unabated, it is particularly sad that we continue to let brilliant and skilful minds go to waste, in what are apparently avoidable deaths.

“In a country where emergency response is almost non-existent, and getting victims to a hospital is already burdensome, it is sad that where the victims make it to a hospital alive, they are still denied treatment and left to die.

“This is not only barbaric and inhumane, but it is also a violation of Hippocratic oath which medical professionals swear to. The situation is further made worse by the fact that obtaining these police reports has been commercialized by some, thus ensuring that there is no quick and easy way to get it done.”

She recalled that on January 15, 2021, David Ntekim-Rex, a 22-year old Systems Engineer was on his way home from work and was attacked around Jibowu, Yaba in the Lagos Central Senatorial District.

According to her, Policemen, upon arrival at the crime scene, were said to be more concerned with whether he was a ‘Yahoo Boy’ and building a report than about saving David.

Tinubu said, “it is alleged that he was rushed to the Military Hospital, Yaba where he was refused treatment on the basis that they could not ascertain whether or not he was a robber, and was subsequently moved to the Lagos University Teaching Hospital where he was not attended to before he gave up the ghost.”

Narrating another incident from December 2019, the lawmaker lamented that the victim, Moradeun Balogun, bled to death after she was stabbed at Gbagada in Lagos State and refused care at the nearest hospital where she had rushed to for medical attention.

Contributing to the debate, Senator Emmanuel Bwacha, in supporting the bill said that providing treatment for victims of gunshot injuries would assist security agencies in securing information from such persons to curb criminality in the country.

He said, “If you get a criminal who is injured and say you won’t treat him, let him die, he dies with a piece of information that would have helped the security agencies curtail the reoccurrence of such criminality.

“As a nation that is looked at as the giant of Africa, we should set a good precedent that other nations in the African sub-region would follow.”

On his part, Senator Ibikunle Amosun insisted that the sanctity of life must be protected at all cost, saying, “even if those people have committed those crimes, it is when they are alive that they can face the music, and others will learn from it.”

The bill after scaling the second reading was referred by the Deputy Senate President, Ovie Omo-Agege, to the Joint Committees on Judiciary, Human Rights and Legal Matters; and Health (Secondary and Tertiary) for legislative inputs.

The Joint Committee was given four weeks to report back to the Senate.