The new governor of Imo state; Emeka Ihedioha recently gave the just exited governor; Rocahs Okorocha an ultimatum to hand over properly, few days after the inauguration ceremony was conducted.

The former governor in a statement released by his media aide, insisting he had done the needful said; 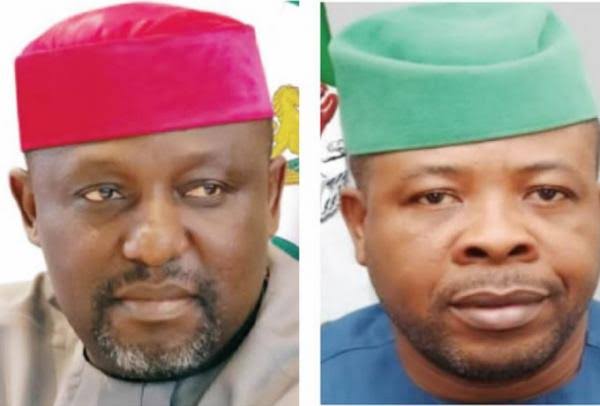 He renamed the Imo Trade & Investment Centre Ahiajioku Centre, and he must have discovered that he has no audience. He has also said that the brand new Government House Okorocha handed over to him was an eyesore with a photograph of a bad toilet they must have taken from the PDP Office in Owerri. He has equally denied that the former governor left N42.5 billion for him, yet, the banks mentioned to that effect have never denied being in custody of the mentioned sums.”

“Today, it is the issue of handover. There was a Joint Inauguration Committee with his Secretary to the State Government now, Chief Chris Okewulonu as Co-chairman. They were handed over both assets and liabilities and taken round the key projects. They were satisfied. And the Principal Secretary to the former governor has also been there. He received the governor in Government House, took him round and also handed over to him any other thing left to be handed over”.

“Even before May 29, 2019, when he was sworn in as governor, he had made up his mind to invest heavily on blackmail against his predecessor. For instance, with the inauguration time-table, he was to meet with the governor then, Owelle Okorocha on May 2, 2019, but he called to say that he was travelling. He skipped that important meeting.

Again, May 5, 2019, was slated for his tour of selected projects with the governor then but he also avoided that. May 6 to May 20, 2019, was scheduled for Ministerial handover and Account reconciliation but he was never seen. He avoided close contact with the man he was coming to replace. Even the Joint Inauguration Church Service fixed for May 25, 2019, at Heroes Square.

Governor Ihedioha should tell his audience what he wants from the former governor. Let him mention those things so that we can take off from there… Let him mention it so that his motive can be clearer. In any case, he should find out why it appears that Imo people are not excited about his governorship and also not in agreement with him in all his blackmail against his predecessor. And also why on the day of his inauguration Imo people never cared to know what was happening.

Let him also know that by July, we are going to challenge him for a road walk with Owelle Okorocha on the major streets of Owerri. As we have continued to allude, he has come to unveil the Heroism of Owelle Okorocha.

In case he does not know, the only thing he can do and dwarf Okorocha is to work and achieve more than him. Where he fails to do that, he has lost the contest. It is only his achievements more than what Okorocha did, that can help him in what he is trying to do. Aside from that, he should find other things to do or take the world as he sees it. Okorocha is the defending Champion of Imo governorship based on his achievements. There is nothing anybody can do about that”.