#NS10vs10: Wizkid won against Vybz Kartel in “Battle Of Hits” 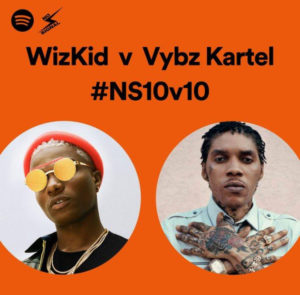 The virtual radio show took place on Twitter on Sunday night via the handle @TheresNoSignall, played the top 10 songs from both artistes and asked fans to vote in a poll of rounds, from hits 1 to 10.

After all said and done, Wizkid won all the rounds scoring a ten to null against Vybz Kartel. The session had international artistes and media platforms tuning in and sent Twitter into a frenzy.

These are the songs that were played in each round.