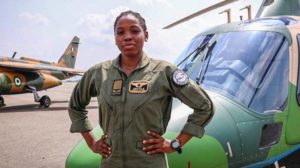 This was announced by the Chief of the Air Staff, Air Marshal Sadique Abubakar at the inauguration of the accommodation block at the NAF base in Port Harcourt. He said, “The late Flying Officer, Tolulope Arotile, who was the first female combat helicopter pilot in the history of the Nigeria Air Force, died on July 14, at the age of 24.

“It is with mixed feelings that we are having the pilot crew room here at the Nigeria Air Force’s home of combat helicopters, named in her honour. The immortalisation of Arotile is also significant such that it addresses another area of our policy thrust of assuring our personnel that their sacrifices will never be in vain.”

Laycon Reveals He Is A Sickle Cell ...

Fate of Alakada To Hit Cinemas on ...