Veteran comedian Ali Baba,called out to say that not all women are the same and men who disagree, do not know anything.

In an Instagram post on Friday, the actor added that just as all women are not the same, all men are not dogs. He shared some scenarios to buttress his point.

Not all women are the same… just as not all men are dogs. There are some who would not mind their man acting in a movie and kissing another woman. Some are not even bothered if the person you dated last was her cousin… while some will raise hell if you as much as had asked her friend out in 1998 and she said no, and you came to still ask her out.

I know of a lady that does not permit her current bobos taking pictures with an ex… and then you have others who don’t mind if you work as a close business partner in an organization with an ex. Some do not mind being a second wife or even third… while some can not share a boyfriend. I know babes who can not date a married man, yet some can even have kids for married men.

There are some babes that have kids and have taken care of the children from birth to ages above 25yrs they no send the man. There are others, even if they can afford it, the man must pay for everything that child needs. There are some ladies you will tell, “come let’s go to Dubai for a week, all expenses paid”… and they will start drooling. Some others will feel insulted. I have seen a wife say, if the women outside like, let 10 or more of them have children for you outside, I am not going anywhere. Then you find one lady that walks away from a marriage because she read a romantic text message on your phone from a babe.

Some women are ok if a man touched them 8 months ago. While a family meeting will be called if it’s 2 weeks since the last time. You will not hear some women tell another person that she dated and was dumped by any man talk less of a pastor… while another will sing like a bird. Some will be too ashamed to be linked with a scandal, while Na some go start the SCANDAL sef then begin to find who go FIX HER back when the yawa gas.

So men who say all women are the same don’t know anything. It depends on the person the woman is. Some have grown thick skins, others matured along the way, some are a consequence of previous relationships, others just know where their shoe pinches and would leave it there, some don’t just care. Many have been there done that and nothing can shock them again. So different strokes different strokes. 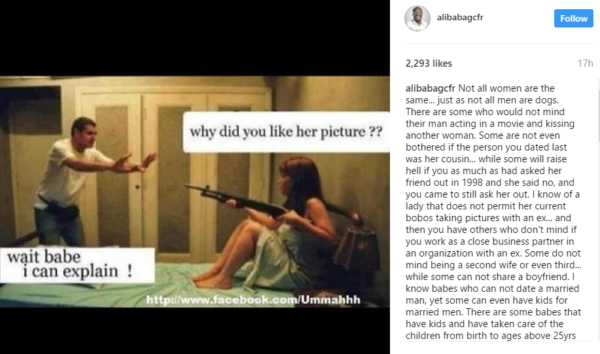 My Wife Derives Pleasure in Beating me ...