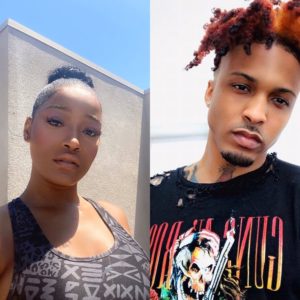 Keke Palmer found herself entangled in Twitter feud with August Alsina yesterday, after a fan alleged the pair were linked around the same time August was engaged in an affair with actress Jada Pinkett Smith, 48.

The altercation occurred hours after Jada released the highly anticipated episode of her Facebook show Red Table Talk, where she spoke candidly with husband Will Smith, 51, about the affair she had ‘around four years ago’ with August.

Keke responded to the aforementioned fan – who had uploaded a picture of Keke and August originally posted to Keke’s Instagram account in 2015 – and insisted that ‘August was never [her] man.’

Once August was made aware of Keke’s tweet, the 27-year-old singer launched into a Twitter tirade against the 26-year-old actress, where he denied having any interest in her and urged her to ‘mind [her] business.’

Keke’s response to the fan on Twitter that attempted to suggest that she and August were romantically linked in 2015, the actress wrote: ‘Yes girl. August was never my man lol. That’s why you’re still reaching to this day to figure out nothing.’

August went on to quote tweet Keke’s response and wrote that Keke could ‘possibly never’ be with him and accused her of ‘speaking subliminal shade’ amid the Jada drama.

‘U absolutely right.I was NEVER ur man. You could possibly never shortie. It seems u mad u got curved,’ wrote August in one tweet.

He also wrote that Keke’s ‘friends’ had a hand in his disinterest in her, alleging that they ‘showed [him] an endless thread of txt/pics’ that she had sent to them regarding him. 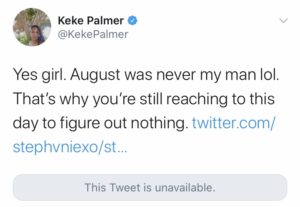 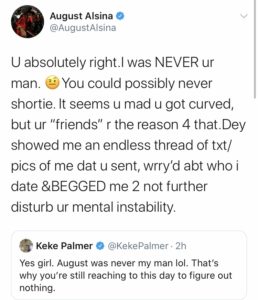 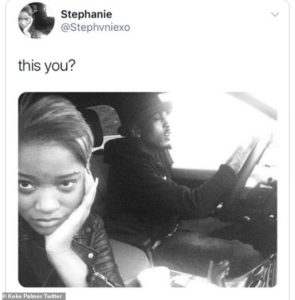