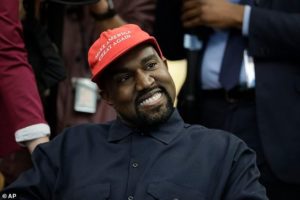 Kanye West is reportedly out of the presidential race, just days after announcing his run.

The rapper shared on 4 July that he was planning on becoming the US president,  in a tweet that raised eyebrows all over the world.

According to the Intelligencer West hired campaign staff who were looking into getting his name listed as a third-party candidate in Florida and several other states, but the team has now reportedly been told the bid is off.

Steve Kramer, an election strategist hired by West to focus on getting his name on the ballot in Florida and South Carolina, told the publication on Thursday, ‘He’s out’.

Yet, West’s bid was serious and there were 180 people working in the ground in Florida when the decision was made to call the effort off, Kramer said.

The rapper, 43, has not publicly commented on whether his run for the presidency is continuing.