The listening party for Kanye West’s latest album “DONDA” set a record on Apple that no artist has ever come near. 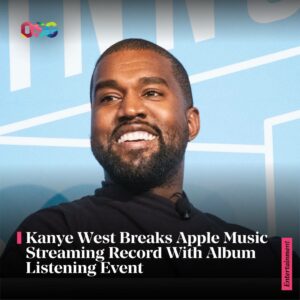 Sources with direct knowledge told TMZ that Kanye’s album event at Mercedes-Benz Stadium in Atlanta broke the Apple Music Global Livestream record with 3.3 million viewers who tuned in on their screens.

This surpasses previous record set by Gucci Mane and Jeezy in their highly-anticipated Verzuz battle earlier last year at a reported 1.8 million viewers.

The 3.3 million views happened exactly during the album listening and may have been more if the video remained on Apple Music for people to watch.

TMZ also noted that the album is projected to drop on the 6th of August, and the Atlanta performance will be posted to Apple for fans to watch again.