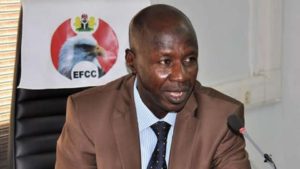 These officials were suspended following the ongoing investigation of the suspended Acting Chairman of EFCC, Ibrahim Magu.

Reports reveal that some affected directors had been a member of the probe team investigating Abubakar Malami (SAN), Attorney-General of the Federation and Minister of Justice.

Prior to their suspension, some officers were in charge of high profile investigations until they received letters informing them of their dismissal from the anti-crime agency.