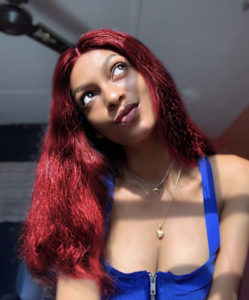 Social media influencer, Adedamola Adewale Rukayat popularly known as Adeherself has finally broken silence after she was released by EFCC following her arrest.

Adeherself was charged by the Economic and Financial Crimes Commission (EFFC) to the Special Offence Court presided by Justice Sherifat Solebo on the account of possessing fraudulent documents.

The popular socialite was linked to an internet fraud activity perpetuated by some young men in Lekki and was released after meeting the N500,000 bail.

Speaking for the first time after her arrest saga, Adeherself took to social media to express her heartfelt gratitude to her fans and concerned Nigerians who showed her support in diverse ways to see her out of trouble.