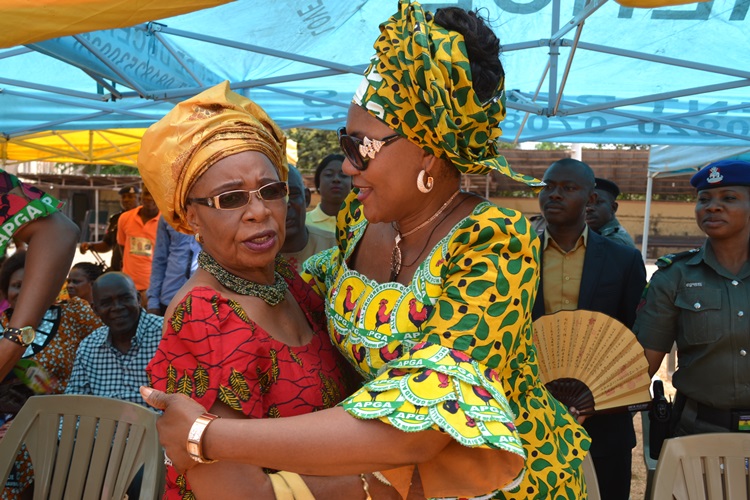 The former governor of Anambra State, Dame Virgy Etiaba has extolled the virtues of the wife of the governor of Anambra State, Chief (Mrs.) Ebelechukwu Obiano, for steadfastly working in support of her husband governor Obiano for the good of Anambra State. Dame Etiaba made the commendation at Anaedo Social Club field during the campaign tour of Nnewi North LGA on February 2, 2015.? The statement of the former governor was echoed by others at Nnewi South, Ihiala and Ekwusigo Local governments campaign for candidates of the All Progressives Grand Alliance (APGA) in Anambra state.

?The former governor said that the commitment of the wife of the governor is well known to all especially the women. According to Dame Etiaba, ” Osodieme lives up to her name because she is working hard like her husband and is mobilizing the women to do the right thing to ensure that they cast their votes during the elections. I am surprised that she is such a good speaker and she picks her words carefully too.” Dame Etiaba urged the women-folk to take note of the important advice Mrs. Obiano gave them concerning the need to obtain Permanent Voters Card (PVC), and how to cast their votes for good candidates during the forth-coming elections.

The wife of the governor told the women who thronged the Anaedo Hall venue that the government of Chief Willie Obiano is committed to the good of all in the spirit of the APGA philosophy of “Be your brothers and sisters keeper.” Mrs. Obiano whilst calling for total support for APGA candidates advised the women “We should discard whatever differences we may have for the good of our state. Let us pull together as a people with one destiny, make sure we get our PVC which empowers us to vote and support APGA candidates in the elections.” Mrs. Obiano also told the women to vote for President Jonathan because he is the best for peace and progress in Nigeria, and thanked Mrs. Etiaba for joining the Nnewi campaign.

At the St Mary’s Catholic School field, Nnewi South LGA, the Chairman Hon Ossy Iyiegbu told Mrs. Obiano that the people are witnesses and beneficiaries of the good works of the governor and her commitment to the welfare of Anambra women and the less privileged; assuring that her that her plea to vote APGA candidates is heard with total support. The total support for APGA candidates was also promised at Ihiala and Ekwusigo LGA where the Chairman Barr.Jude Mbaegbu thanked Mrs. Obiano for sparing the time campaign for the return of APGA  candidates during the February 21015 elections.