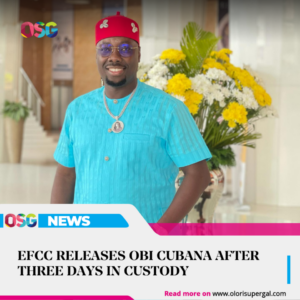 Billionaire businessman, Obinna Iyiegbu, better known as Obi Cubana, has been released by the Economic and Financial Crimes Commission three days after he was arrested.

Wilson Uwujaren, the spokesman for the EFCC, confirmed late on Thursday that Obi Cubana had been released from its custody, according to The Punch.

He had been held and interrogated since Monday afternoon by the anti-graft agency. He was quizzed over his alleged involvement in money laundering and tax fraud, among other illicit financial deals before he was granted administrative bail.

On Wednesday afternoon, there was wild jubilation after a post was made on his Instagram page to make people believe he was out of the agency’s custody.