EBUKA OBI UCHENDU, CHIDI OKEREKE, DANIEL ADEMINOKAN GIVE A THUMBS UP TO THE SET-UP MOVIE BREAKING THE NOLLYWOOD STATUS QUO

The Set Up hit all cinemas on the 9th of August and the fans are completely in love! Since the release of the blockbuster directed by the acclaimed Niyi Akinmolayan movie lovers and fans all around have taken to social media to express their “ pride “ with some likening it to top Hollywood blockbuster movies as well. Our very own Ebuka Obi-Uchendu says 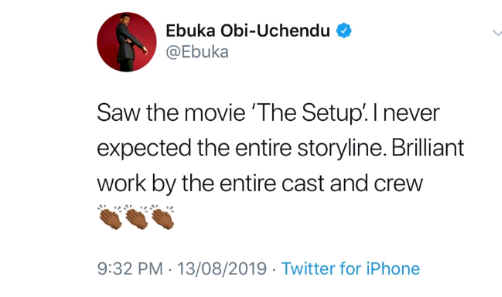 Several fans have commended the “intelligent writing, breathtaking cinematography and outstanding performances from cast members such as Adesua Etomi, Kehinde Bankole, Jim Iyke, Tina Mba, Joke Silva, Daokre Egbuson and Ayo Ayoola, claiming that this movie is an agent of change in Nollywood.

The Set Up Movie is still showing in cinemas nationwide, ensure you don’t miss it!
#TheSetUpFilm

Acclaimed screenwriter Chidi Okereke also has a comment on #thesetupfim 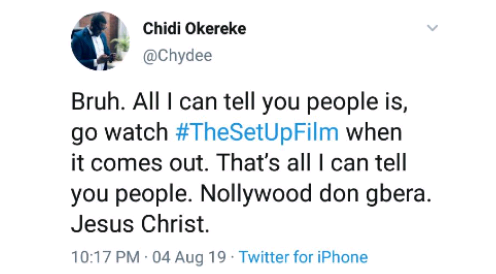 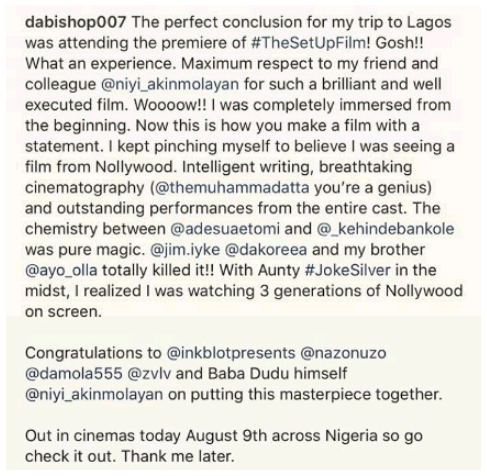