CHRIS BROWN HEARTBROKEN AFTER SEEING EX-GIRLFRIEND KARRUECHE WITH ANOTHER MAN

American singer, Chris Brown is heartbroken. After photos of Karrueche Tran kissing her boyfriend, Victor Cruz, in a pool emerged, many trolls on the internet tagged Chris Brown in the photos. He commented on this photo and a few hours later deleted his instagram page. 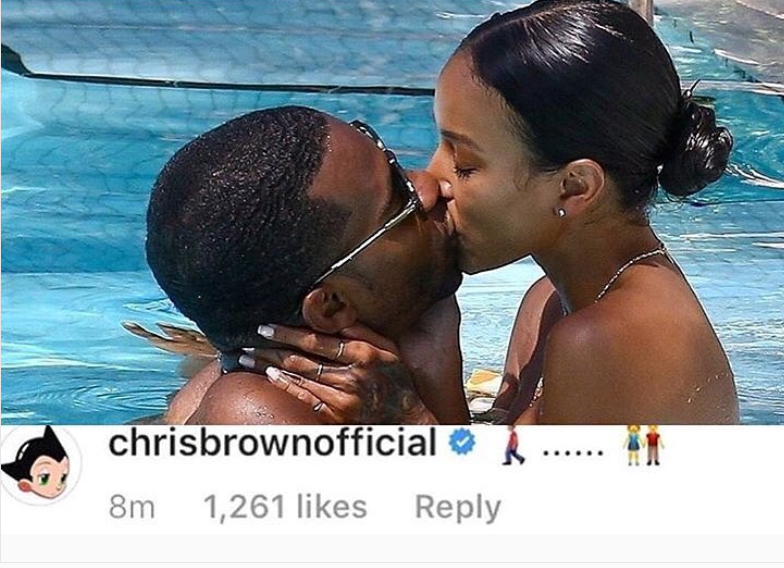 Chris Brown and Karrueche Tran’s relationship has been off and on over the years. Feuds and reconciliations have been frequent, and have often taken place through quickly deleted Instagram comments.
The couple met in 2011, on one of Tran’s styling jobs, and the two begin dating. In October 2012, Chris breaks things off to be “single,” telling Us Weekly, “I love Karrueche very much but I don’t want to see her hurt over my friendship with Rihanna. I’d rather be single allowing us to both be happy in our lives.” He then suggests he loves both Rihanna and Karrueche in a promo video. “Is there such thing as loving two people? I don’t know if that’s possible but for me I just feel like that.”

In May 2013, after Chris Brown and Rihanna’s relationship fizzles out, he and Karrueche reportedly got back together, just prior to Chris’s 24th birthday.
In March 24, after Chris spends time in rehab, where he may or may not have slept with another woman, a report suggested that Karrueche had dumped the singer.

In August 2014, the two were spotted being affectionate at a charity football game, and it’s later reported that they’re officially back together.
In December 2014, Chris Brown announced that he’s single again. Exclaiming “fuck that bitch!” in reference to Karrueche.

Now witnessing Karueche with another man has obviously triggered memories in him. Leading to his deleting his Instagram page. He may later restore it, fans say.