CCB Preparing Charges Against Magu Over Breach Of Asset Declaration 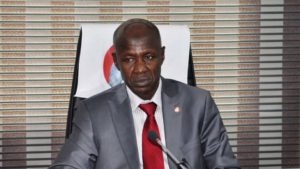 The Code of Conduct Bureau (CCB) is warming up to launch charges at Ibrahim Magu, former acting chairman of the Economic and Financial Crimes Commission (EFCC) over his negligence in declaring his assets while in office.

This charge is coming after Magu has been accused by the Code of Conduct Bureau (CCB) for deliberately paying a blind eye to his asset declaration for the government as it is required for all government officials to declare their assets.

Magu is set to face the Code of Conduct Tribunal (CCT), to stand trial of his accusation which is totally different from the presidential panel probing him over corruption allegations.

His lawyer, Wahab Shittu has reacted to the accusations of his failure to declare assets as a “gross misrepresentation and blatant falsehood” made against his client. The outcome of the alegations would be settled in court as the due process takes it place in the matter.