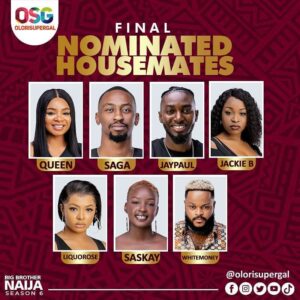 Seven housemates have been nominated for possible eviction in week Seven of the Big Brother Naija Season 6 edition.

Queen, Saga, JayPaul, SASKAY, WhiteMoney, Liquorose, and Jackie B are up for possible eviction this week.

Eight housemates were initially nominated Pere and Emmanuel Inclusive. However, after the head of the house game, Emmanuel was automatically saved.

Pere who came second in the game replaced himself with Queen.

At least one of the nominated housemates will exit the show during the live eviction show, on Sunday, 12th September 2021.

Saga: JayPaul and Jackie B

Jackie B: Pere and Saga

Emmanuel: Yousef and Jackie B